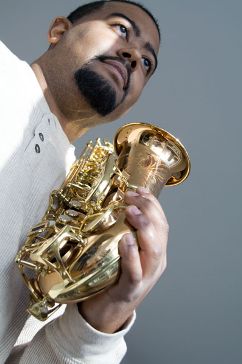 slideshow
ATLANTA, GA—Noted jazz saxophonist Brian Hogans, together with Turnaround Records, announces the release of his debut solo album, titled Evidence of Things to Come. This album represents an artistic triumph for Hogans, who is already well-known as a member of the illustrious Sean Jones Quintet, playing his smooth saxophone sounds on two of their acclaimed albums and touring with them throughout the world.

Many of the songs on Evidence of Things to Come are feats of musical exploration, allowing Hogans free rein with his solos and improvisations. The title track starts with a silky saxophone sound echoed by guitar, slowly building into a Hogans' meditative solo. Another track, “Mind Tricks," highlights a piano undertone paired with a spirited melodic line.

“Cloud Nine," the last track, is a three-movement suite exploring obsession, inward struggle and resolution. Hogans shows in this track that he can embrace electronic instruments as well, creating a synthesized string presence which helps showcase his journey into mood and conflict.

Hogans' interest in jazz has evolved over a lifetime of playing music. Hailing from Morrow, GA, Brian has wailed on the saxophone for 15 years and played piano since childhood. He credits noted artists like Sonny Stitt, Bird, and John Coltrane for influencing his fluid yet fiery saxophone sounds, and greats like Cedar Walton, Herbie Hancock and Chick Corea as favorites who helped him develop his unique piano voicings.

“Ever since I started listening to jazz, I was fascinated by it," says Hogans. “I enjoy how jazz is always changing, and I love the ability to vary harmonies to create new sounds, new moods, and new emotions."

Hogans has performed with some contemporary jazz greats, including James Williams, Winard Harper, Russell Gunn and Marcus Printup. His long-time collaboration with the Sean Jones Quintet includes an album, The Search Within, which Hippo Press reviewed, saying, “I can't imagine anyone finding a single fault with this album aside from its utter lack of imperfection."

Performing throughout the world, Hogans' concerts have included dates with the Sean Jones Quintet at the Detroit and Chicago Jazz Fests, The Jazz Standard and Iridium in New York and Yoshi's in Oakland, CA, among others. Fans can also see Brian at Churchill Grounds in Atlanta and at Blue Note and Groove in New York.

“We are thrilled to help launch Brian Hogans' soloist career," said N. Nginyo, President of Turnaround Records. “We pride ourselves in recognizing and promoting the very best of contemporary jazz talent, and Brian Hogans, with his amazing artistic and creative gifts, will make an enormous contribution to the jazz world."

Songs from Evidence of Things to Come, as well as more information on Brian Hogans, can be found at turnaroundrecords.com. Hogans' album will be available for purchase on iTunes, CDBaby, Amazon.com and many other online retailers. I