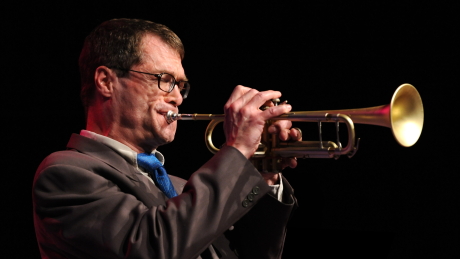 The John Marshall Quintet featuring Grant Stewart will fill Abingdon Theatre with the sound of Jazz for this one evening benefit special performance. Having learned his craft, with help from Ornette Coleman and Lonnie Hillyer, trumpeter John Marshall went on to work with a succession of big bands led by Buddy Rich, Mel Lewis, Lionel Hampton, Al Porcino, Gerry Mulligan and Dizzy Gillespie. In the late eighties John and pianist Tardo Hammer co-led the Bopera House, a standard-setting quintet which also featured tenor saxophonist Ralph Lalama. Originally from New York, John moved to Europe in 1992 and became a member of the brass section and featured soloist with the West Deutscher Rundfunk Big Band, based in Cologne, Germany, he is one of the brightest contemporary hard bop trumpet voices. John Marshall leads his own quintets in Europe and has put out seven CDs as a leader since 1992, and many more as a sideman. He now returns to New York for the month of August to appear at Abingdon Theatre with an amazing assembled group of jazz musicians.

Since moving to New York City from Toronto in 1990 at the age of nineteen, Grant Stewart, on tenor saxophone, has studied with such masters as Barry Harris and Donald Byrd. He has performed with Curtis Fuller, Clark Terry, Etta Jones, Bill Charlap, Brad Mehldau, Russell Malone, Larry Goldings, Peter Bernstein, Jimmy Cobb, Harry Connick, Mickey Roker, Cecil Payne and was a member of the last Al Grey Sextet. Stewart can be found playing at such clubs in NY as Birdland, Smoke, The Ketano, The Jazz Standard, Fat Cat and at Smalls Jazz Club. Stewart has performed all over North America and Europe as well as in Japan, Brazil and Taiwan. Grant also has many CDs out as a leader and sideman.

Pianist Tardo Hammer is a native New Yorker and honed his craft working with Charlie Rouse, Junior Cook, Bill Hardman, Art Farmer and Clifford Jordan. He co-led the Bopera House quintet with John Marshall in the eighties, as previously mentioned. These days he can be heard around town and around the globe with legendary singer Annie Ross, tenor saxophonist Charles Davis and with his own fine trio, which works regularly at Dizzy's Club Coca-Cola.

The Bassist Neal Miner is greatly sought-after by many including James Moody, Frank Wess and Jon Hendricks. He can be heard with Jane Monheit's current group as well as with Annie Ross (along with Tardo).

The most senior member of the aggregation is drummer Jimmy Wormworth. Along with Tardo Hammer, he plays regularly with Charles Davis, Annie Ross and in Tardo's own trio. In the sixties and seventies he worked with such greats as Kenny Dorham, J.R. Montrose, Mal Waldron, Al Haig and Sal Nistico.

Since 1993, not-for-profit Abingdon Theatre Company has developed and produced new plays by American playwrights exclusively. Under the artistic direction of Jan Buttram, the company provides a safe home in which playwrights collaborate with other theatre artists and receive audience feedback through the utilization of our four-step development process: First Readings, Staged Readings, and Workout Labs, which culminate in Studio Productions and Mainstage Productions. Now on sale are 2010-2011 Season Subscription Tickets.