Jazz at Atlas in Newburgh, NY is proud to announce its initial slate of performances for 2018, beginning New Standard Trio on Saturday, March 24. 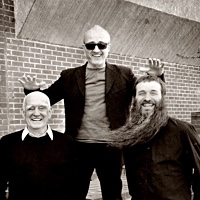 slideshow
“Over a career now spanning nearly thirty years, Jamie Saft has established himself as one of the visionaries of contemporary American music. As a composer, pianist and keyboard innovator, and collaborator of music icons such as Bad Brains, Beastie Boys, the B-52s, Donovan, John Adams and John Zorn, he has been fearless in his pursuit of spiritual elevation through music that both seeks to embrace the whole American canon, and also transcend it, by seamlessly assimilating genres, traditions, idioms and timelines…among these, one of the most successful was a piano trio collaboration with jazz giants Steve Swallow and Bobby Previte, The New Standard. On Loneliness Road, the (New Standard Trio) are joined on three tracks by singer Iggy Pop, who just turned 70 years old!”

Jazz at Atlas is proud to announce its initial slate of performances for 2018, all taking place at Atlas Studios, located at 11 Spring St. in Newburgh, NY. Each concert begins at 8 PM.

[email protected]’s first concert in 2018 will present New Standard Trio, a renowned ensemble including Jamie Saft on piano and keyboards, Steve Swallow on acoustic bass guitar and Bobby Previte on drums. New Standard Trio comes off a standout 2017, when their new recording Loneliness Road, featuring guest vocals by the legendary Iggy Pop, was received to much acclaim. New Standard Trio will perform on Saturday, March 24. Tickets will be $25 at the door and $20 in advance — advance sale tickets are on sale now at https://newstandardtrio2018.bpt.me.

Other concerts as part of Jazz at Atlas’ live music series include:

Saft is a mainstay of the downtown scene and a member of bands such as The Spanish Donkey, The Beta Popes, Whoopie Pie, Swami LatePlate, The Shakers and Bakers, Kalashnikov, Pramrod Sexena, and John Zorn's Electric Masada.

Saft was the pianist for the New York and Paris premiers of John Adams' opera “I Was Looking at the Ceiling and then I Saw the Sky" at Lincoln Center and MC93 Bobingy.

Steve Swallow has long been many jazz critics' favorite electric bassist: rather than playing his instrument in a rock-oriented manner, Swallow emphasizes the high notes and, to an extent, approaches the electric bass as if it were a guitar. He originally started on piano and trumpet before settling on the acoustic bass as a teenager. Swallow joined the Paul Bley trio in 1960 and with Bley was part of an avant-garde version of the Jimmy Giuffre 3 during 1960-1962. Swallow recorded with George Russell and was a member of Art Farmer's quartet (1962-1965), Stan Getz's band (1965-1967), and an important edition of Gary Burton's quartet (1967-1970). The latter group (starting with the addition of guitarist Larry Coryell) was actually one of the first fusion groups, and it was during that time that Swallow began playing electric bass; within a few years, he stopped playing acoustic altogether, although today he combines both sounds by playing an acoustic-electric bass guitar custom-built for him by luthier Harvey Citron. Swallow spent a few years in the early '70s living in northern California, during which time he mostly played locally. After the late '70s, he was closely associated with Carla Bley's groups, although he occasionally worked on other projects (including a reunion of the Jimmy Giuffre 3).

Swallow has also proved to be a talented composer with “Eiderdown," “Falling Grace," “General Mojo's Well Laid Plan," and “Hotel Hello" among his better-known pieces. The 21st century saw the release of several Swallow sets, including Damaged in Transit (2003), Histoire Du Clochard: The Bum's Tale (2004), and an intriguing set with poet Robert Creeley, So There (2006). Hotel Hello appeared in 2007, followed by Believe in Spring, a collection of standards with Hans Ulrik and Jonas Johansen issued on the Stunt label, and Carla's Christmas Carols in 2008. In 2010, he recorded IS with trumpeter Tore Johanson for the Inner Ear label. Swallow formed We3 along with Adam Nussbaum and David Leibman; they recorded Amazing in 2011.

Wisteria In 2012, he and drummer Joey Barron played in Steve Kuhn's trio for the recording of Wisteria on ECM. It was a busy year for the bassist: he also recorded another duet offering, The Agnostic Chant Book, with reed and woodwind master Jonas Schoen. He led his own quintet for Into the Woodwork, which was issued on Xtra WATT, in June of 2013, and shared triple-billing with Carla Bley and Andy Sheppard on Trios, which was released in September of that year. In 2016, Swallow once again joined Bley and Sheppard for Andando el Tiempo. The following year, he collaborated with Bobby Previte, Jamie Saft, and special guest Iggy Pop on the recording Loneliness Road.

Bobby Previte is a composer and performer whose work explores the nexus between notated and improvised music. One of the seminal figures of the 1980s New York ‘Downtown’ scene, Previte is the recipient of the 2015 Greenfield Prize for music and was a Guggenheim Foundation Fellow in 2012. He has received multiple awards for composition from the NEA, NYFA, NYSCA, New Music USA, The Jerome Foundation, The New York State Music Fund, Lower Manhattan Cultural Council, and the American Music Center. Mr. Previte has been an artist-in-residence at the Rockefeller Foundation in Bellagio, Italy, Civitella Ranieri, The Montalvo Arts Center, The Hermitage Artist Retreat, and nine times at the MacDowell Colony.

His original compositions have been recorded and released on Sony, Elektra, Rykodisc, Palmetto, New World, Ropeadope, Tzadik, Thirsty Ear, Cantaloupe and Rarenoise. Leading a plethora of diverse ensembles from his instrument, the drums, he has collaborated with many of the leading lights in and beyond the world of music, including master composer John Adams, iconic singer Tom Waits, pantheon filmmaker Robert Altman, and most recently, rock legend Iggy Pop. His music has been labeled as ‘utterly original,’ by the New York Times, while The New Yorker has said his ensembles ‘speak in visionary tongues.’ Mr. Previte has given master classes at schools and universities around the world including The Eastma School of Music, The New School, Bard College, and Princeton University. His recent work includes: TERMINALS, Five Concertos for Percussion Ensemble and Soloist, with SO Percussion, released October 28th, 2014 by Cantaloupe Music, GONE, with Bobby Previte & the Visitors, released summer 2016 on the forTune label, TERMINALS QUARTETS, the percussion only version of Terminals, summer 2016, by Cantaloupe Music, and MASS, a music in nine parts for choir, pipe organ, and metal trio, released April 2017 by Rarenoise Records. His newest work, RHAPSODY, a song cycle on the subject of migration, was commissioned by the Greenfield Prize at the Hermitage Artist Retreat, and premiered April 21, 2017 at New College in Sarasota, Florida. Scored for acoustic guitar, harp, piano, voice, drums and saxophone, and featuring a powerhouse band of Zeena Parkins, John Medeski, Nels Cline, Greg Osby, and Jen Shyu, RHAPSODY was recorded in New York and will be released in January, 2018 by Rarenoise.

About Jazz at Atlas

Jazz at Atlas is a cooperative effort of writer, musician and multimedia artist James Keepnews and music researcher, radio host and producer Ben Young. Along with presenting performances by world-renowned creative musicians, JAA will also be offering listening sessions, dialogues with artists and classes covering the entire spectrum of creative music in all its varied manifestations around the world and throughout its history.