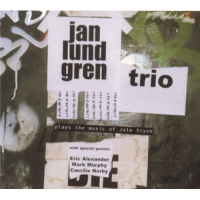 Norby sings on Make Someone Happy and The Party's Over; Murphy (above) is on What Makes the Sunset and The Things We Did Last Summer; and Alexander is on It's You Or No One and Guess I'll Have to Hang My Tears Out to Dry. The balance is handled by the trio: You Say You Care, People, Dance Only With Me, Time After Time and I Fall in Love Too Easily.

On The Jan Lundgren Trio Plays the Music of Victor Young, the lineup is Jan Lundgren (p), Mattias Svensson (b), Rasmus Kihlberg (d), with special guests Johnny Griffin (ts) and Deborah Brown and Stacey Kent (v). Griffin plays on A Weaver of Dreams and When I Fall in Love; Brown sings on A Hundred Years From Today and Stella By Starlight; and Stacey sings on Street of Dreams and My Foolish Heart. The trio plays I Don't Stand a Ghost of a Chance, Song of Delilah, Golden Earrings, Sweet Sue Just You, Love Letters, Alone at Last and Beautiful Love.

Both are perfect albums. The songs were marvelously chosen as were the special guests. To hear the late Mark Murphy with Jan on What Makes the Sunset and, even better, The Things We Did Last Summer makes you wish the pair recorded a dozen albums together. They were perfectly matched in temperament and mood, which you can hear in Murphy's all-in vocalese. Murphy's songs are the high points of both dates. Which takes nothing away from the other vocalists on both albums. They are superb, with Stacey delivering pure heartbreak hers and Norby and Brown giving us flawless full-feel renditions on theirs. Brown is especially terrific on The Party's Over, with shades of Nancy Wilson.

As we hear on the Young collection, particularly on Weaver of Dreams, Griffin (above) was still in his prime in 2001. He always sounded up on his toes, soloing like a dancer and wailing with slides here and there. A strong and bold performance. Alexander is given an up-tempo tune and a ballad, so we get to hear him in two different modes, both forthright and smooth.

Jan is spry on up-tempo numbers (think Bill Evans an Alan Broadbent) and soulfully pensive on the slower tunes without bogging down or brooding too much. His technique is completely in touch with the American jazz approach while he retains a distinct Scandinavian depth. Both albums were brilliantly produced albums when released and remain so today. They shouldn't be missed.

As Jan recently told Guy Jones, an English financial consultant who has lived in Sweden with his wife and family since 2010: “These albums have a rare and special place in my discography. I’ve never recorded anything else which involved quite as many jazz greats, and I’m unlikely to get quite the same opportunity again. It was simply wonderful to work with these hugely talented artists in exploring the songs of two such genius composers.”

JazzWax clips: Here's Mark Murphy with the Jan Lundgren Trio on What Makes the Sunset...

Here's Johnny Griffin with the Jan Lundren Trio on Weaver of Dreams...

JazzWax note: Fog Arts plans to release Jan's Something To Live For (1999), For Listeners Only (2001) and Svenska Landskap (2003) starting at the end of October.