I've Got News For You! The Ed Palermo Big Band Releases An Astonishing, Blues-Rich Tribute To The Music Of Edgar Winter On Oct. 15, 2021 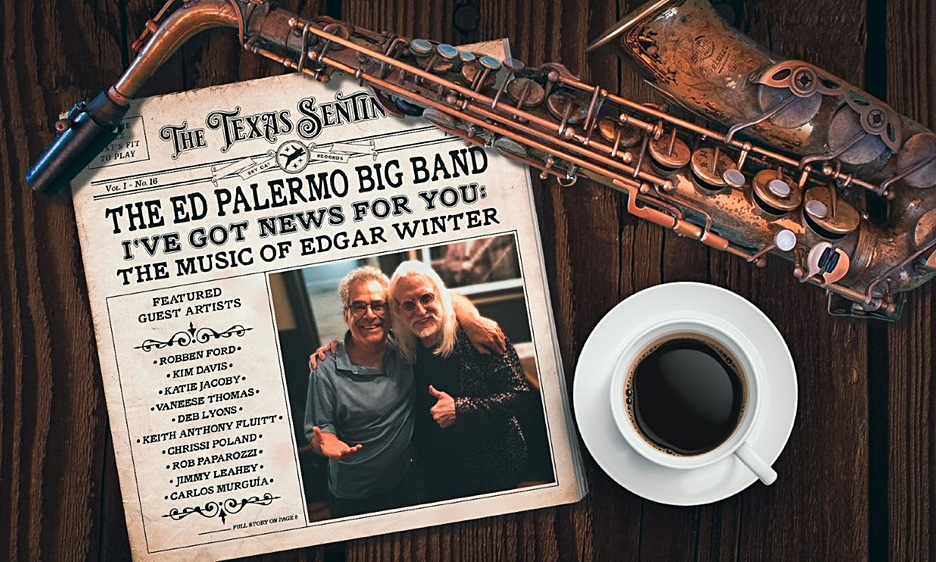 The Ed Palermo Big Band Delivers an Entrancing Tribute to Legendary Texas Blues/Jazz Multi-Instrumentalist EDGAR WINTER with I’ve Got News For You: The Music of Edgar Winter

For acclaimed jazz big band leader, arranger, composer and saxophonist Ed Palermo, Edgar Winter wasn’t just a gateway drug to jazz. To a youth raised on New Jersey's shore, the music of the Texan multi-instrumental star was a mind-expanding key that unlocked the overlapping realms of blues, jazz and rock. There’s a straight line between Palermo’s teenage immersion in Winter’s music and the emergence decades later of his big band, which has earned international renown for its authentically warped arrangements of Frank Zappa’s music. Palermo has long included Winter material in the band’s wide-ranging book, but his new album on the Sky Cat Records, I’ve Got News For You: The Music of Edgar Winter, is his first dedicated to his early inspiration. Slated for release on Oct. 15, 2021, the album is almost indecently fun, as if someone crossed the New Testament Count Basie Orchestra’s book with a Zappa-designed R&B revue.

With his adventurous spirit and talent-packed big band, Palermo is ideally placed to celebrate a singular artist who, Winter himself acknowledges, “is primarily thought of as a rocker,” known for virtuosic scorchers like “Frankenstein,” an instrumental tune that was “almost a precursor of heavy metal and fusion,” Winter said. “But I also love jazz and classical and if there's one common thread that runs through all my music, it is blues."

“As far as I'm concerned, blues and jazz are the great American contributions to music." —Edgar Winter

Palermo was a budding high school saxophonist with little interest in jazz when he experienced an epiphany listening to the first albums by Beaumont, Texas blues guitarist Johnny Winter, who featured his younger brother Edgar on keyboards, vocals, and most importantly alto sax. “The saxophone playing really blew my mind,” Palermo says. “He’s playing the most killing bebop, fast and smooth. I knew then I wanted to play like that. To this day my main influences are Cannonball, Phil Woods and Edgar Winter, and David Sanborn too.”

The album opens with a blast of boogie, “I Hate Everybody,” a song from Johnny Winter’s 1969 album Second Winter. The track features some stellar work by well-traveled rock guitarist Jimmy Leahey and soul-stirring vocals from Carlos Murguía, a singer best known for his work with an array of Latin music superstars. On “Tobacco Road,” a standout track on Edgar’s 1970 debut album Entrance, Palermo showcases guitar legend Robben Ford and the great Kimberly Davis, whose powerhouse performances throughout the project reveal several different sides of the longtime vocalist for Niles Rodgers’ pioneering disco/rock band Chic. “The hardest part about this album was figuring out who was going to sing,” Palermo said. “On Entrance, Edgar’s singing is astounding. Me and Steve Jankowski realized we need singers who can make the songs their own. Kim Davis is one of my favorites, and she nailed it.”

“II used to go to these old tent revivals and listen to the gospel singers. If you think rock and roll is energetic, it pales in comparison to a Pentecostal tent revival."– Edgar Winter

A forthright rocker delivered with swagger and confidence by vocalist Chrissi Poland, a longtime member of Sam & Dave soul legend Sam Moore’s band, “A Different Game” is another gem from Entrance. She’s matched in intensity by a violin solo by Katie Jacoby, who’s been touring lately with The Who. While the song never made it into Winter’s working repertoire, this rendition should put it back into circulation. And for vocal magic, it’s hard to beat Keith Anthony Fluitt on the ballad “Dying To Live,” a devastating indictment of humanity delivered with the sweet soul crooning of a master whose credits include Ashford & Simpson, Quincy Jones, and Michael Jackson.

As an arranger, Palermo has found inspiration reconfiguring the rock canon for his big band, and he’s got plenty to work with in Winter’s discography. His version of “Peace Pipe,” another tune from Entrance, transforms a solo where Winter scats a unison line along with his organ and arranges it for five saxophones. That’s Barbara Cifelli romping on the baritone sax and Ted Kooshian raising hell on the organ. Palermo takes a turn in the spotlight on “All Out,” a jaunty but harmonically treacherous piece “that Winter told me he envisioned as a theme for Johnny Carson introducing some guest,” Palermo said.

The album’s tour de force is Palermo’s arrangement of “Winter’s Dream,” the suite that takes up the first side of Entrance. The seven movements go from strength to strength, starting and concluding with the enviably versatile Deb Lyons on the album’s title track and its reprise. Other highlights include an imploring Fluitt taking “Where Have You Gone” deep into the pews, and a headlong sprint through “Fire and Ice” evidences much more of the former than the latter. “It’s the song that caught my ear as a kid,” Palermo said. “He plays so fast. It’s a great jazz/rock tune, and more than any other song it changed my life.”

The album closes with a pair of songs, “You Are My Sunshine” and “I’ve Got News For You,” that embody the dualities that bedevil American society: black and white, urban and rural, country and soul. Both pieces were show-stoppers for Winter, and in the hands of an albino white bluesman, polar phenomena are integrated into one irresistible celebration. Palermo based his arrangement of “Sunshine” on a version he heard Winter play in the early 1970s at a concert he recorded on a little reel to reel rig.

“Edgar gets on the piano and says here’s a song done a lot of ways, and he starts playing these very sophisticated chords, very Mose Allison,” Palermo said. “The band kicks in after the verse with these unbelievable emotional chord changes and he’s singing the hell out of it.”

“I liked the more sophisticated urban style of blues like Ray Charles and B. B. King, Bobby Blue Bland, Lou Rawls; people like that with more of a tendency toward jazz." – Edgar Winter

Vaneese Thomas, the daughter of Rufus Thomas and Aretha Franklin’s favorite backup vocalist, is more than equal to the task, offering a performance for the ages. And she’s equally effective on the closer, “I've Got News For You,” a tune indelibly associated with Ray Charles. If Brother Ray got married to Betty Carter after they waxed “Baby, It’s Cold Outside,” the couple may have ended up like Thomas and Rob Paparozzi, who bicker and accuse each other of stepping out on a hilarious duet. It’s a fittingly unexpected conclusion for a tribute to an artist who confounds categorization.

Winter has been part of Palermo’s music since the beginning, literally. On his first big band album, 1982’s Papier Mache, he connected with Winter through drummer Terry Silverlight “and got Edgar to take a couple of solos” on the title track, Palermo said. “As the years went by periodically I’d arrange other songs of his and I’d send them to him and he was always complimentary. ‘All Out,’ that’s an obscure song from Jasmine Nightdream, and he was touched that I would take a song that wasn’t a hit. These are deep cuts. I’ve known him for close to 40 years.”

Clearly, Palermo is no Johnny-come-lately to the genius of Edgar Winter. But 2021’s I’ve Got News For You: The Music of Edgar Winter should serve as a wake-up call to music fans who’ve been sleeping on Winter’s treasure-laden discography. It should also alert fans of big band music to Ed Palermo’s expansive, exceptional and often surprising discography. With this outstanding big band blues tribute – the result of decades of admiration for Winter’s music, and decades of experience leading and arranging music for his stellar musicians—Ed Palermo sets himself apart as one of the most vital bandleaders and versatile arrangers in 21st century big band jazz.

One of the news-worthy messages behind I’ve Got News for You is that contemporary big band jazz is one of American music's most vibrant, inclusive, significant and delightfully entertaining forms, able to evolve and embrace all popular genres to create hybrid American music that is simultaneously rooted in the tradition and startling, refreshingly new. Another notice implicit in I’ve Got News for You: The Music of Edgar Winter is that we should watch where the romantic visionary arranger Ed Palermo leads big band music next.

“I kind of enjoy defying categorization. I love music in and of itself. I love the beauty of harmony and rhythm." —Edgar Winter

The Music Outpost · The Ed Palermo Big Band, 'I've Got News For You' (Sky Cat Records)