"Yes! The great trumpeter John Bailey has made an excellent solo record featuring a bunch of quite memorable original compositions and arrangements with a smoking band. The fare is straight-ahead with a Brazilian flair and everyone is at the absolute top of their game....well worth the wait"! - Randy Brecker

“John Bailey is a great improviser. Since we met as teenagers I've been taken with how natural a musician he is and how deeply his roots go into the tradition of jazz music. He's a joy to listen to!” - Donny McCaslin

The opening trumpet fanfare of John Bailey's album In Real Time heralds the arrival of a major, fully formed talent. Yet Bailey is no newcomer to jazz: this is his first album as a leader after 35 years as one of the busiest sidemen in the business.

Why at age 52 is he now making his debut as a leader? His answer is simple yet profound: “It was just time.”

Known as one of the most eclectic trumpet players in New York City, Bailey is an in-demand musician and teaching artist on call for everything from traditional jazz, to R&B and Pop, to classical. He became a member of The Buddy Rich Band while still in college, and his career has included long-running gigs with Ray Charles, master conguero and bandleader Ray Barretto, Max Weinberg and Frank Sinatra, Jr. His work with Latin Jazz innovator Arturo O'Farrill won two Grammy awards for the albums The Offense of the Drum and Cuba - The Conversation Continues. He has played on more than 70 albums and, as a jazz educator, has taught at the University of Miami and Florida International University.

For his debut album however, Bailey dug deep and came up with a variety of riches as a composer.

“My natural inclination has always been to draw from as many different sources as possible,” he explains. As a child of the 1960s, he learned from Dizzy, Miles and Bird, and was mentored by the legendary multi-instrumentalist Ira Sullivan. He was also influenced by artists as diverse as Jethro Tull, The Beach Boys, classical trumpeter Maurice Andre, and the Chicago Symphony brass section. “Duke Ellington said it best,” says Bailey. “There are only two kinds of music: good music and the other kind.”

Bailey acknowledges deliberately ignoring the boundaries between genres. “As a composer and improviser, I make no lines in the sand, though I try to keep the music coherent.” For In Real Time, Bailey enlisted a group of fellow seekers and jazz veterans including saxophonist Stacey Dillard, guitarist John Hart, bassist Cameron Brown, and drummer Victor Lewis. Through seven originals and two Brazilian covers (by Milton Nascimento and Gilberto Gil), the album has unusual range. From the straight-ahead and boppish, to elegiac ballads and cerebral post-bop flights, his goal is to make the music deep and wide-ranging. In each tune, regardless of where the music takes him, Bailey's ebullient personality shines through.

A trumpet prodigy, Bailey's spectacular gifts began to be noticed as a high school musician in 1984 when DownBeat Magazine cited him in its annual Student Music Awards for outstanding performances in both the classical and jazz trumpet categories, noting “Shades of Wynton!” The same year, he was a finalist in the National Foundation for Advancements in the Arts (NFAA) Arts Recognition and Talent Search, along with Donny McCaslin and Bill Charlap; and won the National Association of Jazz Educators’ Youth Talent Contest. Later, as a senior at the Eastman School of Music, he won DownBeat’s Best Instrumental Soloist award.

Looking back, he says, “It all started for me when I discovered Clifford Brown. Clifford was the centerpiece of the golden era of jazz trumpet, and a great place to begin my lifelong study of the instrument. He was influenced by everyone before him, and became an influence on everyone after.”

Bailey, who continues to teach privately, believes that educating the next generation of musicians is essential for any artist. “In American culture, where the arts are often ignored or deemphasized in both schools and the mainstream media, it is up to us, the artists, to inspire an appreciation for great art.” he says. “By keeping performance standards as high as possible and sharing our devotion with others, especially children, we enrich countless lives.”

With the success of his debut recording as a leader, John Bailey has indeed set the standard very high and enriched our lives.

Trumpeter John Bailey, who continues to teach privately, believes that educating the next generation of musicians is essential for any artist. “In American culture, where the arts are often ignored or deemphasized in both schools and the mainstream media, it is up to us, the artists, to inspire an appreciation for great art.” he says. “By keeping performance standards as high as possible and sharing our devotion with others, especially children, we enrich countless lives.” 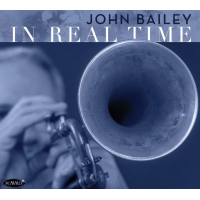 From: Hubub!
By John Bailey

All About Jazz musician pages are maintained by musicians, publicists and trusted members like you. Interested? Tell us why you would like to improve the John Bailey musician page.