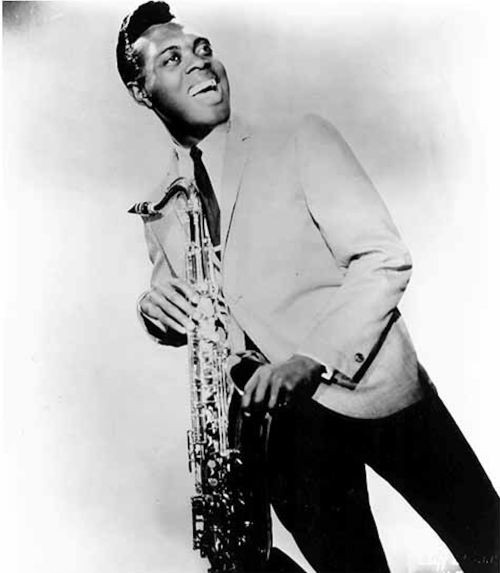 slideshow
Last Sunday I wrote that Big Jay McNeely viewed himself in the late 1940s as a new breed of jazz musician. A reader posted a comment in response, chiding me for saying so. After scouring books on Big Jay, the reader wrote, he couldn't find any reference to the r&b musician's jazz roots or how he viewed his place in jazz history. The writer added that I had jumped to conclusions and took a parting shot at Big Jay. Now, I love books as much as anyone. But as a working journalist, I also love the phone. So yesterday I gave Big Jay a call to bring closure to the matter.

For those who may be unfamiliar with Big Jay McNeely, the saxophonist today is considered one of the earliest r&b stage stars and a forefather of 1950's rock 'n' roll. Known back then as king of the “honkers and screamers," McNeely typically entered concerts walking down the aisle while playing a blues riff. When he arrived on stage, McNeely could whip young integrated audiences into a frenzy by playing only a handful of notes. These powerful riffs eventually wound up played while laying trance-like on stage, much to the crowd's hysterical delight. Today, we look back at Big Jay and see an r&b pioneer. But at the time, Big Jay told me yesterday, he viewed himself as “a jazz musician who played for people who wanted to dance."

In Part 1 of my two-part interview with Big Jay, 82, the legendary saxophonist talks about growing up in California, listening to jazz artists, playing with jazz artists, what jazz artists thought of him, and why he branched into dance music instead of sticking with performance jazz:

JazzWax: Was it tough growing up in Watts, CA, during the Depression?
Big Jay McNeely: No, no. We had plenty of food. My family grew our own vegetables. We had turkeys and chickens running around in the yard. My mother cooked for me, my brother Bob, and my father on a wood-burning stove. Each week, the iceman would come with a six-pound block of ice. It was like country living. [Pictured: Watts Tower]

JW: When did you decide to play the saxophone?
BJM: When I was 16 years old, which was around 1943. My brother played the instrument and was an excellent musician. He could have gone with Cab [Calloway] or any of the big bands, but he was too young. When he was drafted during World War II, he left his saxophone home. I was working at the Firestone Rubber Co. at the time. I decided music would be a better bet for me.

JW: What did you do?
BJM: I rode my bike each day to Mrs. Hightower's house and took lessons for 25 cents. [Saxophonist and singer] Vi Redd was her daughter. [Saxophonist] Sonny Criss and I took lessons from Mrs. Hightower at the same time. Then I took lessons with a gentleman who played first saxophone chair with the RKO Studio Orchestra. He was a great teacher and taught me all about full vibrato, so I could play with a big sound. He was a tremendous musician and could even play Dixieland. I studied harmony, ear training, composition--everything--with him.

JW: What happened when your brother came home from the war?
BJM: We both studied voice with a guy who would eventually teach the Hi-Lo's and the McGuire Sisters. My brother and I figured eventually we'd have to sing and that studying singing would help us with our blowing. Singing was the same principal as playing. You sing from the diaphragm with compact air pressure and the “e" sound.

JW: What's the “e" sound?
BJM: That's the sound you get like an opera singer. If you hum through a comb, you get an “e" sound. That's what makes the sound so big. The principal is you have to have the proper approach. You have to use your whole body as a soundboard. My sax began to sound as smooth as a cello when I studied with him. Eventually my brother and I formed a band. My brother played baritone saxophone. Our band had Hampton Hawes [pictured] and Sonny Criss, until Howard McGhee stole them both away in early 1947 [laughs].

JW: How did you sound as a jazz musician at that point?
BJM: I didn't play with a real legit jazz sound. For that sound you'd use very little lip, what they called a nonpressure embouchure. . Just enough pressure on the reed to make it vibrate. I took the same principles I learned in vocal lessons and applied it for a good, big soulful sound on the saxophone. That's why when I play people recognize it's me. People have criticized me for playing one note but they never criticized my sound [laughs].

JW: Did you listen to jazz musicians in the mid-1940s?
BJM: Oh yes, of course. Charlie Parker, Lester Young, Lucky Thompson, Sonny Stitt, Gene Ammons, Illinois Jacquet, Don Byas--all of them. When Charlie Parker came out to L.A. in the mid-1940s, my mother washed his clothes. We ran [hung out] with him.

JW: Why didn't you become a jazz musician?
BJM: I started out playing jazz but I didn't have a perfect ear, like Sonny Criss did. Guys like Sonny could pick up their horn and play anything. They heard things once and they could go off on it. Also, back then, there were so many players you had to be different on your horn to stand out. Eventually it was a money issue. Many of these jazz guys looked sharp. They were earning. I was wearing hand-me-downs. That made me realize early on that I had to do something different to make money. [Pictured: Big Jay, left, and his brother Bob in 1955 or 1956]

JW: What did you do?
BJM: In 1947, I began playing at the Barrelhouse Club owned by drummer Johnny Otis. It was right down the street from my home. There was a lot of blues energy there. I was thinking of going to New York, to The Apollo theater. But a guy I knew spelled out how things would go for me. He said I'd be a big hit for sure and would earn solid money. But he also warned me that there would be all kinds of guys who would pad me [advance loans] and steal my money. He said I'd wind up owing the government all kinds of money but I wouldn't have it because all the guys who took a cut wouldn't leave me with enough. That made sense, so I decided to stay in L.A.

JW: How did you come to record?
BJM: At the end of 1948 [right after the second AFM strike], Ralph Bass, an a&r guy at Savoy asked me if I wanted to do a record. I said yeah. He told me to put a tune together. A kid I knew in Watts had a record shop. He gave me a record by Glenn Miller that opened with a drummer playing the sock cymbal. I can't remember the name of the song. But I built a blues off of it called Deacon's Hop, which became a big hit [Deacon's Hop hit #1 on the R&B chart in early 1949].

JW: Your real name is Cecil. How did you wind up with your nickname?
BJM: Ralph, the a&r guy from Savoy records, came up with it. I was getting ready to record Deacon's Hop. We were taking a cab out to my house and were talking. He said “Cecil" was kind of a square name and that I needed a stronger one if I wanted to be big. He asked me what my friends called me. I told him, “James." He said great, “Let's call you Big Jay." So it stuck.

JW: While you were playing r&b during the late 1940s, did you consider yourself a jazz musician?
BJM: I always thought of myself as a jazz musician who was playing for people who wanted to dance. Before I even recorded Deacon's Hop I worked on Central Avenue in Los Angeles at all the jazz clubs. I knew Teddy Edwards, Wardell Gray, Miles Davis, Eddie Heywood, Ben Webster, Lucky Thompson--all those cats. I wanted to become a jazz musician, but when I recorded Deacon's Hop in 1948, it became so big they wouldn't let me record anything else but more of it. That's around the time I started playing a more soulful thing.

JW: So jazz was always on your mind?
BJM: Sure. I was trying to play jazz before Deacon's Hop but I just didn't have the ear. You can train yourself to have an ear. But unless it comes natural when you're young, it's much harder as you get older. If you had studied, you could imitate and pick up on whatever you heard. Bird [Charlie Parker] could play the chord changes to everything. But by me not having a perfect ear, I had to work harder to develop what I played. When I started developing my own sound and adding power, it was a whole different thing. It was the complete opposite from what I had been doing.

JW: Did jazz artists dig you?
BJM: Hamp [Hawes], Bird, Miles, Sonny [Criss]--they all loved what I did. Dizzy, too. I played Birdland in New York in the early 1950s and opened for jazz artists. They'd put me on first, before Milt Jackson, Ben Webster, Erroll Garner, all of them. I was always the opener. I guess to get the people who were there excited.

Tomorrow, Big Jay talks about how the theatrical component to his act started, who was responsible for making Deacon's Hop popular with kids in Los Angeles, why he was arrested in San Diego, his strategy for playing to the crowd, and thoughts on whether rock 'n' roll destroyed jazz.

JazzWax shocker: For whatever reason, Big Jay has not yet been inducted into the Rock & Roll Hall of Fame. I'll talk to him about this tomorrow--and I'll surely give the Hall a call.

JazzWax tracks: A fine retrospective of Big Jay's work can be found on Nervous, which includes Deacon's Hop, 3-D, Nervous Man Nervous and There Is Something on Your Mind, his biggest hit. It's available at iTunes and Amazon as a download. To hear what Big Jay sounds like today, dig Big Jay McNeely & Dana Gillespie: Cherry Pie, released in March. It's also available as a download or on CD, and the album is fabulous.

JazzWax clip: Go here to see what Big Jay was like in 1983, complete with his dramatic and signature aisle entry.