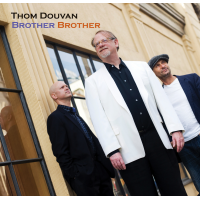 Though veteran guitarist Thom Douvan currently splits his time between the Bay Area and Los Angeles, his heart is still deeply imbedded in the Motor City, where he gained invaluable bandstand experience during the ‘80s with a group of former Motown session men collectively known as The Funk Brothers. Those funk and soul-jazz roots run deep with the Ann Arbor native and come to the surface on his second release as a leader, Brother Brother—an outing dedicated to Funk Brothers Johnny Griffith & Richard “Pistol” Allen.

While Douvan has accumulated an abundance of chops since his stint at the Berklee College of Music in Boston and his subsequent 40 years as a working professional, he prefers to keep his chops in check on Brother Brother. “Fast and burning? Well, that’s not my thing,” says the 55-year-old guitarist. “I’m into the soul groove. I like to lay into the pocket.”

Surrounded by such seasoned vets as drummers James Gadson, Michael Barsimanto, Sr Tony E. Moore, Frank Wilson and the late Ralph Penland (who passed away shortly before the release of this recording), Hammond organists Duncan Mcmillan and Bobby Pierce, and saxophonist Tony Malfatti, Douvan impresses with his tasty six-string work and soulful expression. From pleasing, warm-toned instrumental renditions of the Isley Brothers’ “Harvest for the World” and Earth, Wind & Fire’s “That’s the Way of the World” to Marvin Gaye’s “What’s Going On,” Donny Hathaway’s “Someday We’ll All Be Free” and Bobby Womack’s “You’re Welcome, Stop On By,” Douvan wears his soulful tendencies on his sleeve throughout his sophomore outing. He and his stellar crew render the Chaka Khan tune “Ain’t Nobody” as an up-tempo swinger while the guitarist dials up some cutting edge tones on a wonderful re-imagining of Stevie Wonder’s “Isn’t She Lovely” that travels from 12/8 African mambo to 4/4 shuffle-swing groove. “Occasionally, we like to mix it up with tempos and just reinvent those great old soul songs in a new context,” says the guitarist.

Their swinging organ group rendition of the traditional “The Water is Wide” eventually morphs into a “Killer Joe” groove, which becomes a nice launching pad for saxophonist Tony Malfatti to dig in and really blow. Elsewhere on Brother Brother, they reinterpret Tony Toni Tone’s “Anniversary,” Hall & Oates’ “Sara Smile” and the Isley Brothers’ “For the Love of You” as mellow Wes Montgomery-styled instrumentals. “I also wanted to include some neo-soul things on the album,” says Douvan, “which is why we do Alicia Keys’ ‘If I Ain’t Got You’,” which includes the guitarist’s most explosive, blues-drenched solo on the collection. Along the way you can also hear the influence of such respected rhythm guitarists and soulful soloists as David T. Walker, Phil Upchurch and Cornell Dupree in his playing as well as touches of such jazz icons as Montgomery, Grant Green, Larry Carlton and Detroit’s own Kenny Burrell.

Growing up in Ann Arbor, Douvan became exposed to blues and jazz as a teenager through the annual Ann Arbor Blues & Jazz Festival, where he saw the likes of Magic Sam, Muddy Waters, Howlin’ Wolf, Count Basie, Miles Davis, Dave Brubeck, Pharoah Sanders with Leon Thomas, Sun Ra and countless other acts. He was further introduced to jazz at age 15 by trumpeter Louis Smith, a Cannonball Adderley protégé who was hired to teach music in the Ann Arbor public schools during the early ‘70s. “I played in my first soul band when I was 16 years old in high school,” he recalls. “That was a life-changing event for me because all the suburban kids that I grew up with...it was a very competitive thing of who can play faster, who can play louder. But when I joined this soul band, everybody was very supportive and saying things like, ‘Take another solo! Have your way!’ I just found it to be a very supportive community and one that I was attracted to.”

While attending law school, Douvan began playing with The Funk Brothers around 1985, long before those Detroit musicians appeared in the successful 2002 documentary Standing in the Shadows of Motown, which effectively launched their second career. He worked with The Funk Brothers until 1992, when he relocated to California. But as Brother Brother proves, you can take the man out of Detroit, but you can’t take Detroit out of the man. “I’m a roots player,” says Douvan. “I love Americana...anything from the roots. But I gravitate towards soul music, that’s my thing.”

Set against the backdrop of smooth, soulful grooves and the omnipresent sound of the Hammond B-3 organ, Brother Brother is Douvan’s most heartfelt and fully realized recording to date.