Forgotten Series: Bennie Maupin - The Jewel in the Lotus (1974)

SOURCE: SOMETHING ELSE!
April 3, 2011
Sign in to view read count 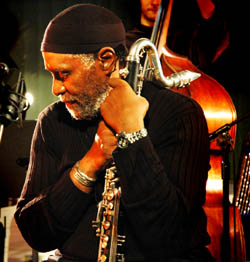 Part of the genius of Miles Davis (aside from the incredible compositions, insanely great trumpet work, and spooky ability to play just the right notes) was his amazing talent for selecting band members.

The list is seemingly endless and the branches extend over an impressive subsection of modern jazz: John Coltrane, Chick Corea, Keith Jarrett, Wayne Shorter, Ron Carter, Herbie Hancock, Joe Zawinul, Tony Williams, and on it goes. When Miles headed toward the electric side of modern, he might have lost a few fans along the way, but his musical intuition never wavered. The results included In A Silent Way, Bitches Brew and On The Corner.

Multi-instrumentalist Bennie Maupin is on the alumnus list that grew out of the funk and dark groove-oriented side of Davis (to which Maupin added his stellar bass clarinet). The Jewel in the Lotus, originally issued on vinyl in 1974, somehow didn't appear on compact disc until 2007. The ECM reissue is a natural extension of the dark funk of Miles, the more playful sounds of Herbie Hancock's Headhunters, and the space of Hancock's Mwandishi.

The big difference between this album and its ancestors is that Maupin made no attempt to amp up the sound, choosing instead to focus on more localized interactions with much less density. The result is a collection of vignettes that first present and then “live with" an atmosphere. It's an interesting angle, viewing the landscape of the improvisations from the inside out.

What made this approach so successful was that the careful listener could enhance the experience by taking note of the areas of overlap between the two broad styles: slowly unfolding vs. slowly devolving. Along with former members of both the Headhunters and the Mwandishi projects, Maupin's Jewel in the Lotus perfectly illustrates the idea of live musical storytelling. The only question that remains is “How the heck was this out of print for so long?"

The opening track “Ensenada" provides a good example of music slowly unfolding. Over a two-note bass ostinato, marimbas and the occasional glockenspiel note ring out. Herbie Hancock teases out a few more notes on the piano and the percussion locks in before the simple main theme is presented. The entire ensemble seems the breathe in this idea and then exhale variations on it. It almost reminds me of Ornette's Harmolodic thing, though taking a more linear path. In any event, it's not difficult to imagine this music describing the blossoming colors of dawn. Yes, it's that evocative.

“Song For Tracie Dixon Summers" moves along similar lines, though a little healthy tension is built up front as Buster Williams opens with a long bass solo that the group suddenly leaps upon. Later, as phrases are extended, the entire group drops back allowing enough space for fragmentary piano figures to provide a path to the next group statement. There's a great Downbeat magazine quote about this album—"a more selfless album is hard to imagine"—yes, that's exactly right.

Given the high-powered lineup, it would have been a little disappointing if Maupin had never let the group run free. Thankfully, “Mappo" shows a more driven and free side of this group. Featuring trumpeter Charles Sullivan early on and then switching to Hancock later, this long suite fits a maximum hunk of percussion beneath, under, and on top of each melodic segment. It's very reminiscent of Pharoah Sanders' “Astral Traveling," with the group's free play first implying and then finally constructing a theme. For a short while, it seemed like coherence would never be attained as the music was allowed to devolve into chaos. Not quite!

Again, why was this record out of print?

Honestly, it doesn't matter. The wrong has been righted, and now the world (minus those lucky vinyl affcionados) can finally hear the truth: that Miles was (almost!) never wrong.