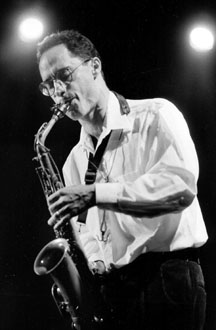 slideshow
Firehouse 12's 2008 Fall Jazz Series continues on Friday, October 3rd with a two set performance by multi-instrumentalist Ned Rothenberg's longstanding trio, Sync. The worldly group has been active for the past decade, performing a distinctive brand of improvised acoustic music defined by the combination of Rothenberg's original compositions and the group's unusual instrumentation, which each integrate a variety of musical traditions. Sync features Rothenberg on clarinets, alto saxophone and shakuhachi (a Japanese bamboo flute), Jerome Harris on acoustic guitar and bass guitar and Samir Chatterjee on tabla (a traditional percussion instrument from Indian classical music).

“Ned Rothenberg has long been one of the most inventive, consistently satisfying performer-composers on the New York scene," wrote the Washington Post's Stephen Brooks in his 2006 review of a Sync concert, “always exploring the edges (who else plays the shakuhachi in jazz?) and embarking on strange, evocative and ear-bending forays into the sonic unknown. But this is unusually thoughtful music, and the subtlety of the tabla, along with the Harris's sinuous guitar work, beautifully complemented Rothenberg's detailed, colorful and hyper-imaginative playing." Critics have also noted the group “has found a most palatable merger of jazz and Asian music" (Bob Blumenthal, Boston Globe), creating a “strongly organic music that's a cohesive mesh of different musical influences, flavors, and approaches" (Joslyn Layne, All Music Guide).

Rothenberg is known as “a strong, adventurous musician and conceptualist" (Ben Ratliff, New York Times), “an almost frighteningly talented musician and composer" (Kurt Gottschalk, AllAboutJazz.com) and “a fully matured multi-instrumentalist whose stock is strangely undervalued" (Bill Shoemaker, The Wire). A native of Boston, he has lived and worked in New York for the past 30 years, while also touring the world with a wide range of prominent collaborators as well as his own bands. Sync, his primary focus as a leader in recent years, released its third recording, Inner Diaspora, in early 2007 on John Zorn's Tzadik label. The record, which received widespread critical acclaim, finds Rothenberg bringing his personal take on the music of his Jewish heritage to the existing multicultural foundation of the group, which is joined on the record by violinist Mark Feldman and cellist Erik Friedlander.