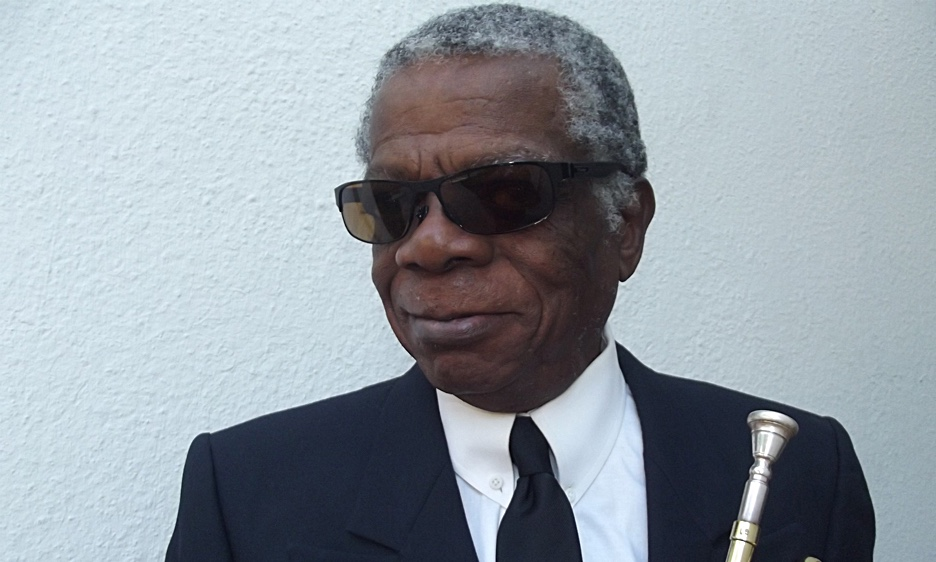 view slideshow
SOURCE: JOANN STEVENS
July 17, 2020
Sign in to view read count
Eddie Gale, the pioneering Brooklyn-born jazz trumpeter who began his career as a sideman with legendary jazz artists such as Sun Ra, Larry Young, and Cecil Taylor before forging his path as a band leader on Blue Note Records and a performer and music educator on the East and West Coasts, passed away Friday, July 10, 2020. Gale was 78.

He’d resided in San Jose since 1972. In 1974, San Jose Mayor Norman Y. Mineta named him “San Jose’s Ambassador of Jazz,” for helping to bring jazz to the schools, an honor Gale took seriously.

Gale used jazz diplomacy to build bridges between multicultural communities and generations, and promoted world and inner-peace through music. It caught on, earning him a loyal following and numerous awards, including the Sankofa Award from the California Arts Council for 25 years of service to youth and the Jefferson Award for community service in the arts. He was recognized by the New York Village Voice for A Minute with Miles named one of the Best Jazz Recordings of 1992. In 2019 he received a Black Legends Hall of Fame, Silicon Valley award.

With 35 years of support from his wife, Georgette Gale, the couple created community partnerships for youth and the world.

Gale was a healthcare advocate, especially for musicians. He created Jazz Musicians’ Self-Help Healthcare fundraisers donating proceeds from the performances to the Jazz Foundation of America.

To support the arts in public schools and engage music lovers, Gale organized the Evergreen Youth Adult Jazz Society, and the We’re Jazzed! Youth /Adult Jazz Festival to create performance opportunities for youth at venues in San Jose. One of his last San Jose projects was to give away dozens of free trumpets to youth.

With support from the San Jose State Cultural Heritage Center for 20 years, Gale produced his annual Concerts for World Peace and Peace Poetry Contest, and annual Concerts for Inner Peace in America and the World. These events were held at the Dr. Martin Luther King Jr. Library, and the First AME Zion Church in San Jose. Gale also held a California Arts Council Residency and received funding from the council to produce improvisational music workshops at San Jose State University, and venues in the Oakland, CA community.

A believer in the power of jazz to transform society, Gale’s musical activism is highlighted in the history book Listen, Whitey! The Sights and Sounds of Black Power 1965- 1975 by Pat Thomas.

“Eddie Gale and Horace Silver changed the sound of Blue Note with consciousness-raising lyrical-jazz compositions,” Thomas wrote. “While there are other politically conscious recordings in the Blue Note catalog, there’s nothing quite like the two albums trumpeter Eddie Gale recorded in 1968 and 1969. Social messages aside, Ghetto Music and its sequel, Black Rhythm Happening, are delightfully unique by any comparison.”

As a sideman Gale's discography includes Cecil Taylor’s composition “Inter-Evening,” which is part of the Smithsonian Collection of Classic Jazz.

Gale was the oldest son of Edward and Daisy Gale Stevens, both deceased. He is survived by three of his four siblings, his wife Georgette; his first wife, Marlene; his six children: Donna, Marc, Chanel, Djuana, Gwilu and Teyonda, his 12 grandchildren, 11 great-grandchildren, numerous nephews, nieces, cousins, friends, and admiring jazz supporters worldwide.