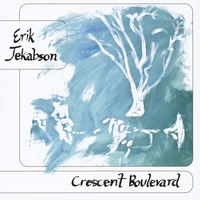 Crescent Boulevard features a cast of Bay Area musicians and Jekabson's original compositions except for one standard, “My Shining Hour." Having toured with Galactic, John Mayer, Illinois Jacquet, the Woody Herman Big Band, Eddy Louiss and the Howard Fishman Quartet, Jekabson has developed a strong musical personality and the music on Crescent Boulevard reflects that&#151full of groove and soul yet understated and patient, full of variety yet firmly rooted in a subtle, reflective mood.