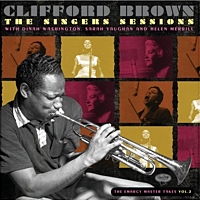 slideshow
Available exclusively at Hip-OSelect.com now and available to all retailers October 23, 2012

Legendary trumpeter Clifford Brown was not only a master bandleader, soloist and composer, he was a supremely sensitive sideman – a welcome addition to any jazz session. The newly released 3-CD set, The Singers Sessions: The EmArcy Master Takes Vol. 2, collects the EmArcy label recordings in which “Brownie” is featured behind three of the greatest singers of his era: in an ensemble behind Dinah Washington during an informal, live-in the-studio jam session; a carefully arranged date with the incomparable Sarah Vaughan; and the stunning debut recording by Helen Merrill. All of the material, recorded in 1954-1955, previously issued across several compact disc projects in the past three decades – with the Dinah albums now out of print for years – has been newly remastered from the original master tapes.

The Dinah Washington recordings, some with vocals and others spotlighting the band that also included Maynard Ferguson, Clark Terry and Junior Mance, were originally issued on two separate 12-inch LPs; in the 1980s some unreleased tracks were discovered and issued on a massive “complete” Washington box set, then included on a Clifford Brown box set a few years later. This is now the first time in years the tracks are available in full.

Sarah Vaughan’s self-titled album, her first in the then-new 12-inch LP format, was arranged by Count Basie veteran Ernie Wilkins and featured Brown perfectly complementing the singer. Brownie jumped right back in the studio four days later to record with Helen Merrill, on her first-ever LP. Arranged by none other than Quincy Jones, it remains a classic of cool vocal jazz.

The Singers Sessions: The EmArcy Master Takes Vol. 2 follows the box set containing The EmArcy Takes: Vol. 1, fully encapsulating Clifford Brown’s brief but meteoric career on EmArcy Records, the jazz division of Mercury Records. This collection differs in its look: it is housed in the acclaimed Verve Select mini-album packaging, which features a hard-backed book with rare photographs, images of rare EP and LP jackets, and a Grammy®-worthy essay by author and editor Aaron Cohen.