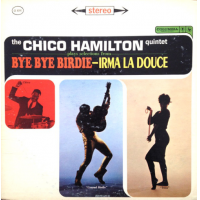 slideshow
As a drummer and leader, Chico Hamilton was vastly important in the evolution of small-group jazz in the 1950s and '60s. Unfortunately, he is nearly forgotten today. A force on the West Coast, Hamilton was a member of the seminal Gerry Mulligan Quartet in the early 1950s, he formed his own unique avant-garde quintet in the mid-1950s and again in the early '60s, and he appeared in the 1957 film Sweet Smell of Success along with his music and most of his quintet. His various groups helped developed the talents and visibility of Jim Hall, Buddy Collette, Paul Horn, Eric Dolphy, Charles Lloyd and many others.

One of Hamilton's rarest albums is The Chico Hamilton Quintet Play Selections from Bye Bye Birdie and Irma La Douce. It doesn't appear to have ever been re-issued digitally, which is a shame. It's not at online retailers such as Amazon nor is it on listening services such as Spotify. Recorded at the end of November 1960, the album for Columbia Records featured Charles Lloyd (fl,as), Nate Gershman (cello), Harry Pope (g), Bobby Haynes (b) and Chico Hamilton (d).

Rather than take the willowy jazz-pop route that so many jazz artists embarked on when covering Broadway musical fare in the late 1950s and early '60s, Hamilton combined songs from both shows and treated the material to a rigorous jazz interpretation. The By e Bye Birdie songs include A Lot of Livin' to Do, Baby Talk to Me, Put on a Happy Face, How Lovely to Be a Woman and Kids. The Irma La Douce tracks were Irma La Douce, Our Language of Love, From a Prison Cell, She's Got the Lot and There Is Only One Paris for That.

The standout players here are Hamilton, whose drums are relentlessly inventive, and Lloyd, whose flute and alto sax are extraordinary. Just listen to Lloyd on Baby Talk to Me and There Is Only One Paris for That. Remarkably, this was Lloyd's very first recording recording session, and he'd remain with Hamilton until the end of 1963.

Hopefully, Fresh Sound will give this one a listen and re-issue it for jazz fans to hear once again. The music is significant.

JazzWax clip: Here's the hippest version of A Lot of Livin' to Do you'll ever hear... Here's the entire album at YouTube...

Here's the music of Chico Hamilton in Sweet Smell of Success...