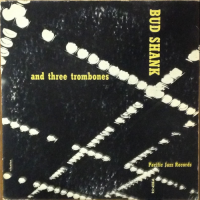 slideshow
Bud Shank was among the most recorded West Coast jazz reed players. He was on more than 600 known sessions, according to Tom Lord's Jazz Discography. Heard most often on alto saxophone, Bud began his recording career in 1947 with Ike Carpenter and then with Charlie Barnet in 1948 before joining Stan Kenton's Innovations Orchestra in 1950. He left the band with Shorty Rogers and others in 1952 to pioneer a more swinging West Coast jazz style in small ensembles, recording largely with groups and bands led by Rogers and Maynard Ferguson.

In 1954, Bud was featured as the leader of a septet album for Pacific Jazz—Bud Shank and Three Trombones— that included Bob Enevoldsen, Maynard Ferguson and Stu Williamson (v-tb), Bud Shank (as), Claude Williamson (p), Joe Mondragon (b) and Shelly Manne (d) playing Bob Cooper's arrangements. In April, four songs were recorded— Mobile, Baby's Birthday Party, You Don't Know What Love Is and Sing Something Simple. The band regrouped in June to record Valve in Head, Cool Fool, Little Girl Blue and Wailing Vessel. These were issued on 10-inch LPs.

This album would be Bud's first pure leadership session, excluding the Bud Shank/Shorty Rogers Quintet date of March 1954, with Rogers on flugelhorn, Bud on flute and alto sax, Jimmy Rowles on piano, Harry Babasin on bass and Roy Harte on drums. On the three-trombones date, you can hear the West Coast energy virtually leaping through the speakers. In most cases, Bud is cast as the fox to the trombone hounds, staying several lengths in front of the snapping horns. But on the ballads Little Girl Blue and You Don't Know What Love Is, Bud's alto sounds as if it's almost crying, with the trombones giving up the chase to surround him and play harmony in support.

Overall, Cooper's trombone arrangements are sterling and gleeful. Enevoldsen, Ferguson and Williamson were tough-tiger valve players, meaning Bud had to work hard to sail above their basso growls and grunts, and sail he does. Among the album's highlights are Wailing Vessel and the song's alternate take. The West Coast produced quite a few trombone-heavy recording sessions, among them Four Freshmen and Five Trombones (1955), Russ Garcia's Four Horns And A Lush Life (1955), Trombones Inc.'s Power-Packed Trombones (1958), Jackie Davis Meets the Trombones (1959) and Pete Rugolo's Ten Trombones Like Two Pianos (1960). Bud's leadership session led the way.