BJU Records Announces The Release Of So Many Roads, The Grand New Recording From Anne Mette Iversen's Double Life 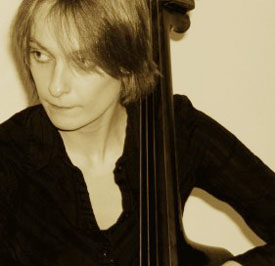 So Many Roads, the grand new album from bassist/composer Anne Mette Iversen's Double Life, to be released on Brooklyn Jazz Underground Records on April 22, is a very personal recording for Iversen. The artist explains, “Its conception and realisation has been a long journey. Along the road I had many ideas about how to present it to you: which story to tell you, which words to describe it with and which pictures to paint in your head. In the end, I rejected them all to let the music speak for itself, and, hopefully, to leave space for it to become your own personal journey."

The music on So Many Roads has the ability to conjure up and provoke emotions, feelings and vivid images. In a word, it is picturesque. Good art transforms within the listener, viewer or reader, to become a deeply personal experience and bring them on a journey as well. “It is my hope that the art, the music, on this album is strong enough to give the listener an experience that sends them on their own personal journey; and therefore, in this context, my personal journey is irrelevant," commented Iversen.

So Many Roads was composed specifically for Iversen's group Double Life, which consists of her long running quartet, the Anne Mette Iversen Quartet, featuring John Ellis (soprano & tenor saxophone), Danny Grissett (piano),Otis Brown III (drums & cymbals) and special guest, the outstanding Swedish trombonist Peter Dahlgren, of the Norrbotten Big Band (who also appeared on the bassist's very first recording, On the Other Side, ten years ago); plus, the string quartet, 4Corners, featuring members of the Danish Radio Symphony Orchestra, who also appeared on Iversen's 2008 recording, Best of the West.

Iversen's band members always claim that the critically acclaimed bassist/composer has a quick turnaround time with her new recordings. This may seem to be the case due to her unblinking dedication to her craft, her professionalism and her admirable skill at seeing a highly creative project through to accouchement. However, So Many Roads has in fact been nearly five years in the making. “I remember clearly when I first sat down and wrote the first notes in our apartment in Red Hook, Brooklyn. It was the section that gave the thematic material which became the theme that connects the piece, and characterizes the entire musical journey," explained Iversen.

So Many Roads, “started out with the idea of being a journey through a mythological world, an imaginary description of travel and related experiences, but it ended up being so closely connected to my own personal life and actually describing a very special period and special experience of my life instead," said Iversen. One could say that a journey, as a theme, has been a part of Iversen's music all along, but So Many Roads became both a premonition and a resolution to 57 months of her own life instead of some fantasy world. “During the protracted period of creating this album, the subject matter quickly changed from the imaginary to reality!," said Iversen.

The music on So Many Roads is quite unique in that it utilizes a one-movement compositional form, and boasts an exquisite balance of integration and interaction between the string group and the jazz group. Take note of the musicians' excellent blend, and exchange of ideas and emotions.

The album opens with a solo bass statement (a way of leading the listener into the composer's universe), before the presentation of the main theme, which comes fully orchestrated and lush, and sets up the framework for the piece. Out of the main theme grows new themes and songs with their own identities, orchestrated in various ways by selected combinations of the musicians from the jazz quintet and the string quartet. One example is the lovely ballad, indicated on the physical disc by Chapter Three, which is played by trombone, string quartet and drums.The music is also characterized by the many transitional sections/elements that serve to connect the piece, but also reveal their own identity. The evolution of the music throughout the album takes you through states of uncertainty, peace, fun, beauty, stress, running the emotional gamut, similar to what one experiences in life.

On So Many Roads, Iversen sought to strike a fine balance between improvisation and composition, and between the jazz quintet and the string quartet. The jazz quintet leads by their expertise with improvising, but are also given important written ensemble parts, which they perform equally well. Conversly, the classical string players contribute to the jazz sections with a deep understanding of phrasing and rhythm. A wonderful example is the strings' interaction with Otis Brown III during his solo towards the end of the piece. The carpet they provide for him is full of playfulness and humor, and reflects a strong sense of mutual respect and enjoyment inherent in these musicians' collaboration, which is apparent on and off the stage/studio.

Iversen knows very well that these days details about an artist's life can be just as important to public perception and acceptance as the art itself, especially in pop-culture. Fortunately within the jazz genre the fan is still a genuine lover of the music, so the attachment and devotion is very much about the music and the experience. Iversen elaborates, “getting deep into something, in general, is rewarding. But although there is plenty of expertise found in our societies today, I wonder how much in-depth study is being spent on art and music. Understanding an art requires commitment and time, something not always easily found in our lives, but the reward for taking this time is high, and I strongly recommend it. Therefore, I only hope that you will give it 36:31 focused minutes of your time, to go on a journey with us, and hopefully find it an emotional enriching experience."