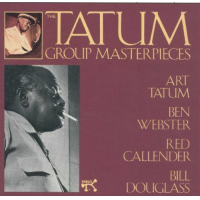 slideshow
For me, jazz is divided between those who recorded with Art Tatum and those who didn't. Tatum remains king of the jazz piano—a briskly shaken cocktail of unrivaled technique, impeccable taste and a staggering ability to make you fall in love whatever song he's playing. Every one of his recordings is a gem, exhibiting daring, speed and lyricism. In solo and trio recordings, you are exposed to raw Tatum in all his centipedic glory. But in group settings, you get all of that plus Tatum as accompanist, which is equally spectacular.

On September 11, 1956, producer Norman Granz ingeniously brought Tatum together in Los Angeles with tenor saxophonist Ben Webster, bassist Red Callender and drummer Bill Douglass. It would be Tatum's last studio session before dying of uremia on November 5 at age of 47.

Seven songs were recorded—Gone With the Wind, All the Things You Are, Have You Met Miss Jones?, My One and Only Love, Night and Day, My Ideal and Where or When. The album was released originally on Verve as The Art Tatum-Ben Webster Quartet in 1958. It was reissued on vinyl in 1975 on Granz's Pablo label as The Tatum Group Masterpieces, Volume Eight and then as a CD in 1992 with three bonus tracks: two alternate versions of Gone With the Wind and an alternate of Have You Met Miss Jones?

A ballad album, the recording feels as if it's taken in slow motion, but that's part of its charm. Tatum is in fine form setting up most songs with lavish introductions before Webster sweeps in with his forceful, breathy horn. The opening track, Gone With the Wind, is a perfect example. Tatum takes two choruses, one with a straightforward approach and the second with a more dashing attack and loads of cascades. Then Webster glides in with a beautiful swinging solo.

Listening to Tatum, you'd never know he had a fatal health problem. Each song is lovingly framed and executed, and the contrast between his lush technique and Webster's sandy solos is swing at its finest.

Or the material is on Art Tatum: The Complete Group Masterpieces remastered here (looks like 80 tracks for $11.49).

JazzWax clips: Here's My One and Only Love...

And here's Gone With the Wind...