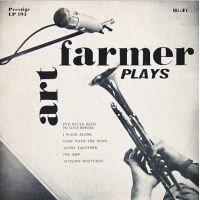 slideshow
Much attention by jazz fans has been paid to the Blue Note label, and deservedly so. But the first half of the 1950s really belongs to Bob Weinstock and Prestige. While Prestige album 10-inch covers weren't as beautifully designed as those by Paul Bacon at Blue Note, the music released on Prestige between 1951 and 1955 was far more significant.

The early 1950s was the dawn of the long-playing 33 1/3 record. The format was invented in 1948 by Columbia without any proprietary claims. Columbia encouraged other labels to adopt the new speed.

At first, the 12-inch size was used exclusively for classical recordings, with a few exceptions. Classical music needed more room and was the big money-maker for labels. But more important, classical didn't require labels to spend big on royalties, since the likes of Beethoven and Tchaikovsky predated ASCAP and BMI. Pop music recorded by singers and jazz artists did require payments to composers.

So for the first seven years of the LP era, from 1949 to 1955, pop and jazz appeared on 10-inch albums. The smaller size meant fewer songs and less royalty payments. On the jazz side, Prestige recorded a vast stable of top-notch jazz musicians, from Miles Davis and Sonny Rollins to Stan Getz, Thelonious Monk and the Modern Jazz Quartet.

One musician who stands out during this 10-inch era on Prestige was trumpeter Art Farmer. Between 1953 and 1955, Farmer released seven 10-inch LPs, and each is a masterpiece. Many were recorded with Gigi Gryce, but taken together the albums are a mix of great musicians from the period. I listened to all of them again yesterday while writing, and the music remains astonishing.

Among the song highlights are Work of Art, Up in Quincy's Room, Soft Show, Confab in Tempo, I'll Take Romance, Evening in Paris, Elephant Walk, I've Never Been in Love Before, Forecast, Sans Souci, Evening in Casablanca, Satellite and so many more. I had planned to make this a Perfect Album post but there's simply too much great Farmer on Prestige during this seminal period to single out any one LP.

And here's the 12-inch album of When Farmer Met Gryce...