BY WOODROW WILKINS
January 13, 2010
Sign in to view read count 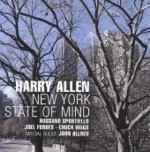 New York City has been the setting of numerous television series and movies. It has also inspired many songs. Tenor saxophonist Harry Allen captures some of that essence with New York State of Mind, named for pop singer Billy Joel's composition.

Allen, 43, was born in Washington, D.C. and raised in both Los Angeles, California, and Burriville, Rhode Island. He has been a sideman to John Pizzarelli and performed at festivals and clubs worldwide. His associations include Rosemary Clooney, Ray Brown, Kenny Burrell, and Bucky Pizzarelli. On this outing, he is accompanied by pianist Rossano Spotiello, bassist Joel Forbes, and drummer Chuck Riggs, with guest trombonist John Allred appearing on several tracks.

The set kicks off with "Puttin' on the Ritz." Allred and Allen trade licks during the introduction and then harmonize on the melody. Throughout, Riggs scores on the hi-hats, with Allen stretching out on a playful solo. Allred follows, at times pitching in some staccato rolls. The overall arrangement is bouncy, jovial.

Things slow down considerably for the moody "Harlem Nocturne." The arrangement doesn't take any risks, but the play is engaging—perfect for a smoky lounge. "Sidewalks of New York" is another lively, taking-in-the-city selection. Allred's jaunting solo is among the highlights, with Allen and Allred overlapping during the song's energetic closing.

After a quiet, moody title song, the band picks up the pace with "Rose of Washington Square." Spotiello has the highlight solo, with Riggs and Forbes engaging in the background. Allen puts the tenor through some frenetic rolls during his solo.

New York State of Mind doesn't present any original music, but it does offer some interesting arrangements of classic pieces. The 13 tracks, including several ballads, make up a fitting tribute to The Big Apple.