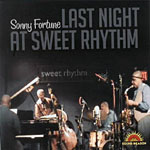 A few months ago, in 2009, reedman Sonny Fortune brought his quartet into the late Greenwich Village club to cut his first live recording as a leader. The performance captured on Last Night at Sweet Rhythm shows, as Fortune moves into his seventies, that his playing is as innovative, daring and fiery as ever.

The set list can be viewed as a kind of retrospective, originals culled from various periods in Fortune's career. He goes for the downs from the first notes of the opener, "It Ain't What It Was," blowing his alto with cleverness and abandon. "In Waves of Dreams" Fortune displays a similar virtuosity playing soprano, where he sounds like a snake charmer playing the blues. He returns to alto for the elegiac "A Tribute to a Holiday," a touching memorial that recalls the pitch and intonation of the singer's timeless voice.

John Coltrane's influence is strong throughout. Although the title suggests Miles Davis, "The Blues Are Green" has a mid-tempo groove reminiscent of early-1960s Trane. Fortune brings the listener into the woodshed, blowing alto with god-imploring urgency. He ups the ante on "The Joneses," opening and closing the song with lyrical, impassioned flute statements and burning the house down on alto in between.

Steve Johns swings effortlessly on drums, David Williams is rock solid on bass and Michael Cochrane is a frequently dazzling pianist, but Last Night at Sweet Rhythm is ultimately Sonny Fortune's showcase. After 50 years his star continues to burn brightly.