By Eyal Hareuveni
December 14, 2013
Sign in to view read count 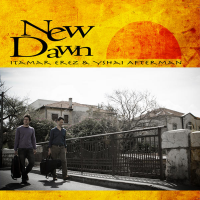 Most of the pieces were recorded on Erez previous albums with his Adama Ensemble (Desert song and Hommage, 2005 and 2010). The two cover Erez musical tributes to his musical heroes, Tekbilek, Tunisian oud master Anouar Brahem and Brazilian guitarist-pianist Egberto Gismonti. "Anouar" is the most interesting of these three. Erez plays the piano, he deliberately doesn't attempt to recreate Brahem's highly personal touch of the oud on his guitar, and abstracts on Brahem's Andalusian roots with a dense, nuanced melody that enriches Brahem's skeletal lines with a suggestion for almost symphonic arrangement for Brahem's arresting melodies.

Erez is a master melodic composer as featured in the Spanish-tinged solo of him "Guajira," sketching leisurely a memorable theme, or on the cover of traditional Sephardic "La Rosa Enflorece," where his elegant and reserved guitar work demonstrated the timeless qualities of this tune. Spanish Harmonica player Antonio Serrano, member of guitarist Paco de Lucia, guests on "New Dawn" and "Lisa," a beautiful love song to Erez wife, adding shiny colors to these strong melodies. Afterman anchors Erez's melodies in a Middle-Eastern—Mediterranean atmosphere, best featured on "Desert Song," now sound as a hypnotic Bedouin song and not as a chamber world music composition that is inspired by Oregon, as on its original version.