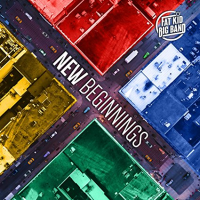 Note to Montreal's Fat Kid Big Band: If you really want to make a favorable first impression on your audience, move the opening track on New Beginnings, "Bustin' My Ass," and replace it with any of the album's five instrumental numbers. Nothing personal, and no disrespect meant to singer Othniel PF, but why would a big band introduce itself with a rather anemic vocal set to a quasi-rock beat when there are so many more enticing choices available?

Othniel PF (yes, that's the name given on the album cover) returns on Track 4, as does the rock vibe, slogging through Michael Jackson / Paul Anka's indifferent "Love Never Felt So Good" before the band recaptures its natural groove on Horimoto's lively Latin-style charmer "The Knight of Cairo," featuring bright solos by Mignogna and the entire trombone section (Desjardins, Modibo Keita, Kalun Leong, bass trombone Olivier Lizotte) with sturdy support from Martin Auguste on drums and cowbells and conguero Diomer Gonzalez. "In the Stone" and "Adieu Montreal" bring on a second vocalist, Anuschka Wright, who fares only marginally better than Othniel PF, which is more an assessment of the material at hand than their individual talents. Even though the lyric is unclear, at least "Montreal" moves pleasantly along at a moderate tempo and includes a second sharp bari solo by Turner.

Two buoyant instrumentals follow, leading the session to a persuasive conclusion. In fact, the last number, the shiny and swinging "A Better Tomorrow," would have served quite well as the album's opener. Horimoto wrote that one, as he did the high-octane "Monty & the Fox" (suggestive at times of Dizzy Gillespie's "Manteca") whose blistering solos are by trumpeter Benoit Beaupre and tenor Tihomir Krastev. Not to be outdone, pianist Martineau and soprano Al McLean burn rubber on "Tomorrow" as the band roars with abandon behind them. More of that exuberance would have been most welcome and would certainly have earned the Fat Kid Big Band higher marks for its promising but uneven New Beginnings.