BY DAN MCCLENAGHAN
October 20, 2019
Sign in to view read count 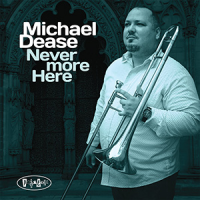 Trombonist Michael Dease released Bonafide (Posi-Tone Records) in 2018. The disc was a testament to some of his influences—pianist Geri Allen, trumpeter Marcus Belgrave, trombonist J.J. Johnson. For his 2019 testament, Never No More Here, he tips his hat to saxophonist Charlie Parker. But he doesn't cover "Confirmation" "or "An Oscar For Treadwell" or "Segment," familiar Parker tunes; nor does he offer up ''Loverman" or ''Star Eyes," familiar Parker vehicles. Instead Never No More Here" reflects on the artists that Parker influenced—trombonist J. J. Johnson, alto saxophonist Jackie McLean, saxophonist Jimmy Heath, pianist John Lewis.

The foremost among those Parker-influenced players here is Johnson, the man who changed the role of jazz trombone, beginning with his stint with the Count Basie Band in the mid 1940s, and a period small combo bebop recordings with Savoy and Prestige Records in the late forties—a period contemporary with Parker's finest work. Dease sounds as if he himself is influenced by Johnson—the bold, smooth tone, the fluidity and suppleness of articulation. Indeed, Never No More could be considered a companion piece to Johnson's Heroes (Verve, 1996), with its similar instrumentation—a quintet fronted by the trombone and a reedist, plus guests, and with pianist Renee Rosnes in the rhythm section. Rosnes was Johnson's late career pianist of choice—Johnson called her a genius—and she sat in the piano chair on Heroes.

The set opens with the Rosnes-penned "Mirror Image." The front line of Dease and alto saxophonist Steve Wilson ply their respective trades in front of Rosnes' sparkling counterpoint, on a tune that sounds like a prayer directed in the direction of Johnson. "A Harmonic Future," was written by Jimmy Heath. Heath came up in Parker's timeframe, the late 1940s, and was nicknamed "Little Bird." The tune swings here, with a cool, smooth groove.

Reedist Eddie Daniels wrote "Slow Dance." It is a gorgeous bossa nova featuring Wilson on flute; and "For Hofsa" comes from the songbook of alto saxophonist Jackie McLean. Dease's band—and especially Dease himself—explore every drop of tenderness and poignancy from this beautiful tribute that McClean wrote for his wife.

The much-covered "Milestones," from the John Lewis songbook, gets some pep with Dease's rendition, featuring an intricate, prickly piano turn by Rosnes, with Dease stepping into the spotlight with an adamant momentum, to wrap up the Charlie Parker tribute with the most Parker-esque tune on the set.