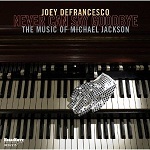 Cross-pollinating jazz and pop does not always yield fruitful residuals—in many instances, it equates to an unbalanced succession of musical events. Here, however, Hammond-B3 titan Joey DeFrancesco renders a happy medium by jazzing up the songbook from the late pop icon Michael Jackson, with jazz, funk and rock stylizations, while retaining its inherent components. DeFrancesco and his band morph grooving jazz improvisation with Jackson's melodic hooks, yet neither genre dominates.

DeFrancesco carves the classic soul-pop ballad, "Never Can Say Goodbye," with sleek undertones abetted by guitarist Paul Bollenback's slippery funk voicings. The organist succeeds at instilling a soulful element, even when embarking on free-flight and climactic solo jaunts. DeFranceso and Bollenback trade torrid fours during the bridge, while gradually lifting the pitch towards the finale. The leader closes out the piece with silvery chord clusters, consummating one of many nicely orchestrated highlights evidenced throughout this tunefully upbeat program.