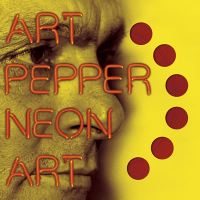 This is not a new release. It is a sensible one. In 2012, Omnivore Records released Art Pepper: Neon Art, Volume 1 in colored vinyl, taking advantage of the current baby boomer infatuation with the inferior medium of our childhood. In the case of Pepper, the medium is not the message. This is music that demands to be heard however, and the time comes that it be released to a larger audience than those hip dinosaurs trying to live 50 years ago (not that I am criticizing, Green River will never sound better than when I peeled it out of the shrink-wrap with my cousin in 1969).

Recorded on January 28, 1981 at Seattle's Parnell's, a year before the saxophonist's death, these two lengthy and less-than-perfect recordings demonstrate that perfection is but a fleeting and disillusioned ideal. Every recording of Pepper from this period is a treasure because the artist was experiencing his Gotterdammerung. Since his triumphant return in 1975, Pepper had expanded his vernacular from 1950's "Cool" through his 1960s Coltrane infatuation to his final statements, something well beyond what Charlie Parker would have achieved had he dissipated later than he did. Pepper show us what naked emotion in music was all about.

These two selections demonstrate jazz without the pressure of live recording, They are two Pepper originals that reveal the saxophonist as a master an innovator of soul-jazz, Pepper hated categorization, but that is the mode best suited to explain a given sound. "Red Car" is a nominal blues that was first presented on The Trip (Galaxy, 1976). What Pepper produces here is a rounded funk that is as intelligent as it is earthy. Perhaps not his most simpatico pianist, Milcho Leviev, nevertheless inspired (read that as: provoked) Pepper into mad improvisation that is all Pepper's. "Red Car" is the soundtrack to the decent episode of "Dragnet" that was never filmed.

"Blues for Blanche" is an original vehicle upon which Pepper shines in both composition and performance. A straight 12-bar blues, the piece allows for a proper bass walk (here produced by David Williams) that swings hard enough to give the listener a nose-bleed. While not definitive for the song (that can be found on Unreleased Art, Vol. III; The Croydon Concert, May 14, 1981), nevertheless, Pepper smokes the whole piece in one long exhale, spurred on by Leviev. This type of jazz was over 20 year previous. This type of music is timeless.