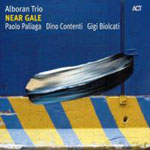 Groups like e.s.t. and The Bad Plus have undeniably given the decades old piano trio format a much needed kick-in-the-ass but, as innovative as they've been and continue to be, some of their founding premises run the risk of inherent self-limitation. Still, despite e.s.t.'s ever-increasing pop sensibility and integration of electronics and sound manipulation, the extended tracks of Live in Hamburg (ACT, 2007) demonstrate that its improvisational acumen and longstanding chemistry remain intact.

In some ways, however, it's the trios remaining truer to their acoustic roots who are providing definitive evidence that the format is not an anachronism relegated to endless interpretations of the Great American Songbook. Brad Mehldau Trio's recent Live (Nonesuch, 2008) combines unexpected source material like Soundgarden's "Black Hole Sun" with clever reinventions of classic jazz tunes and complex originals material. By contrast, Italy's Alboran Trio relies almost exclusively on compositions by its pianist, Paolo Paliaga on Near Gale, it's follow-up to Meltemi, the ensemble's 2006 ACT debut.

Paliaga's writing (drummer Gigi Biocati contributes one tune, the gently optimistic closer, "Seguendo Il Filo") is unmistakably informed by a warmer and breezier Mediterranean aesthetic than e.s.t., but the group chemistry is no less evocative. Bassist Dino Contenti is every bit as imaginative e.s.t.'s Dan Berglund and just as capable with a bow, based on his intro to "Invariable Geometries." But while Berglund's extracurricular heavy metal proclivities compel him to, at times, wail on his double bass guitar-like, Contenti is overall subtler, more lyrical. Classical romanticism is a part of Paliaga's playing and writing—unmistakably evident on "Invariable Geometries"—the overall approach of the trio is rarified, even as the rhythm section picks up steam behind the pianist's gradually intensifying solo.

Contenti is also a focused and theme-oriented pizzicato soloist on tracks like the initially elegant "Fuori Stagione," where he dominates for the first half of the tune before Paliaga takes over and the tune turns idiosyncratic, largely due to Biocata's texturally focused but nevertheless propulsive kit work.

Mediterranean references aside, another Alboran Trio demarcator is Biocati's broad worldview. The percussionist has studied rhythms from around the world, having spent significant time in Africa, where he examined and compared its cultural rhythms with those of Europe, America and Asia. The result is a pan-cultural approach to the kit that is never directly referential but, instead, suggests an integrated cosmopolitanism, providing gentle forward motion on the impressionistic and dark-hued "Olvido," while delivering some unexpected hand-driven funk on the barely more grounded "Rrock in the Dark."

Alboran Trio may not have the instantly attention-grabbing qualities of e.s.t. or TBP, but with Near Gale it proves itself a nascent group on the move. For those who think the piano trio is an outdated concept with nothing new to offer, Alboran Trio and Near Gale represent a compelling argument to the contrary.