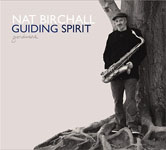 Who would have guessed that a group of musicians in the brash English city of Manchester would, in 2010, be rekindling the astral jazz forged by saxophonist Pharoah Sanders and harpist and pianist Alice Coltrane in the late 1960s? But it's happening, and happening with luminous conviction.

The musicians are centered around trumpeter Matthew Halsall's Gondwana Records label. Saxophonist Nat Birchall's Guiding Spirit is Gondwana's fourth release—following his own Akhenaten (2009) and Halsall's Sending My Love (2008) and Colour Yes (2009)—and is played by the same small grouping of musicians heard, with a few changes, on the other three albums.

The most significant difference between the four discs is that Birchall wrote the music for Guiding Spirit and Akhenaten, and Halsall that for Sending My Love and Colour Yes. This leads to small shifts in emphasis: Birchall's discs evoke astral landmarks such as saxophonist John Coltrane's A Love Supreme (Impulse!, 1965), Sanders' Tauhid (Impulse!, 1967) and Alice Coltrane's Ptah, The El Daoud (Impulse!, 1970); Halsall's discs follow a similar route and add trumpeter Miles Davis' acoustic mojo circa Kind Of Blue (Columbia, 1959) to the mix.

Guiding Spirit features all the elements which defined first-generation astral jazz: a generally sunny melodicism, strong bass ostinatos and piano vamps, vocalized horn playing and trippy, "exotic" percussion heavy on the bells and rattles. In a sense, the music is revivalist, but Birchall and Halsall approach their material with such sincerity and engagement that the results are timeless. The six tracks on Guiding Spirit are not the well-crafted replications typical of revivalism, but creative, quirky and full of unexpected twists and turns.

"My music is very simple, harmonically and melodically," says Birchall. "So you have to play with as much conviction and soul as possible because there's nothing to hide behind, just the truth of how you feel the music."

Birchall concentrates on tenor on four tracks—"Open Up The Gates," "Going To The Mountain," "Becoming" and "Guiding Spirit"—and soprano on "Keep The Light Shining" and "Higher Regions." The titles appear to be informed not just by astral jazz but also by the "conscious" roots reggae of the early 1970s, whose Cedric Brooks and Tommy McCook first inspired Birchall to take up the saxophone, and which is the focus of the DJ sets he still fronts in Manchester clubs.

Melodically, references to Sanders and Coltrane abound. The "eastern" flavor of "Going To The Mountain" was inspired by a phrase Birchall once heard Sanders play; the majestic, looming "Open Up The Gates" channels "Upper Egypt & Lower Egypt" from Tauhid; and "Keep The Light Shining" evokes "The Creator Has A Master Plan" from Sanders' Karma (Impulse!, 1969). Late-middle period Coltrane is another presence. Only on "Becoming," an up-tempo, hard driving blues, does the rhythm section move from ostinatos towards a more mainstream swing, powering the fiercest tenor and trumpet solos on the album.

Harpist Rachael Gladwin is heard on two tracks, and percussionist Chris Manis throughout; each adds a further stamp of authenticity to the music. Second soloist Fairhall occasionally sounds like the block-chording McCoy Tyner of the late 1960s and early 1970s, but more often takes his own, pretty and upper register path. Halsall does his gorgeously lyrical, spacey thing on two tracks.

Guiding Spirit is an album of uncommon beauty. Passionate and muscular, it's inspired by love and spirituality rather than the angry 1960s avant-garde to which first-generation astral jazz was, in part, a riposte. Like the other three discs in the Gondwana catalogue, it is keeping a very special flame alive.