Home » Jazz Articles » Naissam Jalal - The Quest of the Invisible at Savoy Theater in Hel... 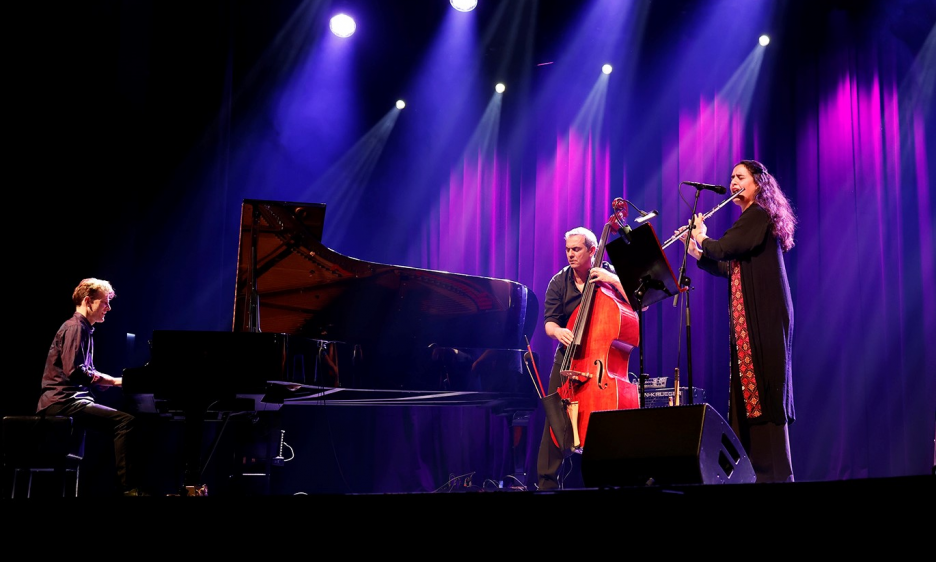 
Naissam Jalal was everything this audience needed on a very snowy February evening in downtown Helsinki. Not only had the concert already been postponed for two years, but it happened to coincide with the second major snowstorm in as many weeks, dumping 15 inches of snow across the city, bringing this normally very snow-savvy city near to gridlock.

However, despite the challenge of midwinter travel, the prospect of a truly class act of international crossover ethnic jazz tempted over 300 listeners into the city's grand Savoy Theater to savor sounds from as far away as one might wish on a chilly Scandinavian night—from the Middle East and North Africa. Jalal and her colleagues, pianist Leonardo Montana and bassist Claude Tchamitchian , all hail nowadays from France, but Jalal had spent several years in her youth in Syria and in Egypt studying their musics. Hence she set the tone for the ethnic theme with her performance and compositions. However, before those years of study in Damascus and Cairo, Jalal had also spent time in the French educational system obtaining her certificate in classical flute in Paris. Since her return to Europe she has maintained her presence in both traditions with multiple projects with artists ranging from Tony Allen to Fatoumata Diawara

Hence the music on this evening, much anticipated after two whole years without any major foreign touring artists and with very limited events featuring local jazzers, was an eclectic blend of straightforward western bebop and jazz fusion studded with Jalal's musical and vocal mastery. From the opening repeated note of "Leil" (in Arabic meaning night), to the closing piece entitled "A Prayer to Protect Me from Myself" with its repeated manta-like line, Jalal sparkled with her classical flute, her Arabic ney and with her own crystal sharp vocals. And at many points she combined the two sound sources, adding whoops or hummed notes behind the ever-flowing flute. At times not only North African motifs appeared but sounds of the whole continent floated through her music.

Adding power to Jalal's often wistful yet strident compositions, while keeping the drive in the music, were two very proficient players, Tchamitchian a veteran bassist of multiple French and European ensembles, and Montana on piano. Often their part was a simple repeated note or motif, but both added breadth with their versatility as well as space for each musician's own improvisation. The combination of a little added delay, deftly plucked or bowed harmonics, and the aid of a very capable house mixer lent themselves to an evening of vibrant sounds and colors. At the close, soundman Pyry Räty also received generous applause, though the unquestioned laurels went to Naissam Jalal and her shining success in leading the Quest of the Invisible.