Debby Moore: My Kind Of Blues 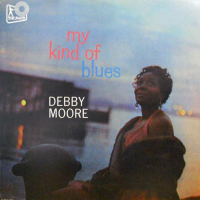 For the record hounds (you know who you are) out there that seek and scavenge the garage sales and flea markets for old albums, there is such a thing as redemption. After scoring My Kind Of Blues by singer Debby Moore at a flea market for one dollar, further research revealed a mysterious back story with a happy ending.

Emmaline Maultsby was born in St. Augustine, Florida, in 1925, and by age 17 with a head full of song and aspiration, she decided to travel to New York in hopes of becoming a singer. Hitting the Big Apple with obvious talent, she was able to have some success in the clubs, and went on to perform with the bands of Earl Hines, and Count Basie. This experience would explain her distinctive sense of jazz voicing and impeccable timing in her phrasing. Her stage name of Debby Moore was bestowed upon her by none other than Louis Armstrong, who befriended her after appearing on the same bill. With exposure came opportunities which led to a tour of Japan, and a recording contract.

After an initial record that fizzled, in 1959 the determined Debby Moore began to assemble a repertoire of standards, write her own songs, and under the tutelage of arranger Don Donaldson, went into the studio to lay down the tracks that would be My Kind Of Blues, originally on the Top Rank Records label. With an all-star cast of accompanists as legendary trumpet man Harry "Sweets" Edison, versatile pianist Jimmy Jones, Barry Galbraith on understated guitar, and anchored by George Duvivier on bass and the stellar Elvin Jones on drums, everything was set, and the tapes began to roll.

The record opens with Moore's big original hit of "Five Months, Two Weeks, Two Days" which was inspired by a sailor she met who kept telling her he had been out of the Navy for that amount of time. There is a superb interplay with the muted horn of Sweets Edison that continues throughout the whole album. Of her other originals, "Nothin' But Trouble On My Mind," is a standout, for Moore delivers it as a mournful hymn, accented by her trademark whistling as a solo. As with many artists of the era, Moore was well versed in the jazz songbook and she does an admirable job on tunes as "See See Rider," "Baby, Won't You Please Come Home," "I'm Travelin' Light," and "Why Don't You Do Right," all standards leaning into the blues, made famous by female vocalists. But she also covers Jimmy Rushing's "Sent For You Yesterday," as well as the Ray Charles opus "Hallelujah, I Love Him So," giving them a generous female approach and interpretation. Moore had a peculiar vocal style in that she often gasped at the end of a lyric, which added a trace of sensuality to her songs. In the context of the era in which this was recorded, these songs were hits, and very much as the norm today, people like to hear songs they are familiar with.

My Kind Of Blues would be Debby Moore's swan song in the music business, as she would eventually return to Florida, and lead a quiet life far away from the wild nightlife of New York City that gave her a brief glimpse at artistic fame. An investigative article in the St. Augustine Record in May 2015, by Kimeko McCoy, reveals that she is now in retirement back in her hometown, and living under her married name of Debbie McDade. This record is her testament in the annals of jazz, and is a swinging session of sweet blues that has withstood the test of time.

Five Months, Two Weeks, Two Days; Come On Home to Me; See See Rider; Nothin’ But Trouble On My Mind; Sent For You Yesterday; Baby, Won’t You Please Come Home; I’m Travelin’ Light; (I Know) My Baby Loves Me; Why Don’t You Do Right; How Come You Do Me Like You Do; Hallelujah, I Love Him So; No Love, No Nothin