MY IRIS: MY IRIS Live! 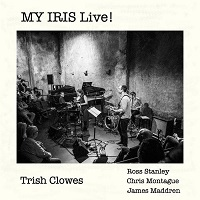 Unable to undertake its scheduled April tour due to COVID 19, MY IRIS, the quartet led by saxophonist Trish Clowes, releases this live recording culled from gigs in Belfast and Galway in October 2019. Captured on Zoom recorder, Clewes has done an admirable job in producing a presentable sound on this digital-download, Bandcamp release. More importantly, in capturing for posterity one of the UK's leading jazz quartets in such fine form, MY IRIS Live! is an important document, and perhaps an overdue one in Clewes' decade-long discography.

It's not, however, MY IRIS' first live recording from Ireland. In February 2018, the quartet completed a successful, six-date Irish tour, organized by Music Network. The track "Lightning Les," from the February 9 gig at Bray's Mermaid Arts Centre, found its way onto Ninety Degrees Gravity (Basho Records, 2019)—one of the standout jazz releases of that year. Just over a year and a half after that Irish tour MY IRIS returned for two gigs in late 2019, at Belfast's Black Box and the now sadly defunct Galway Jazz Festival.

Though mostly highlighting Ninety Degrees Gravity, the recording instead opens with the unreleased "Amber," a knotty escapade with jazz-funk undertones. There are impressive early markers from Clewes, pianist Ross Stanley and guitarist Chris Montague, the latter whose gnarly, country-blues twang should appeal to fans of Scott Henderson and Oz Noy. The other unreleased number is the beautiful, after-hours ballad "Shirley," which nods to the classic jazz of yore. James Maddren's brushes underpin a beguiling Clewes solo that Lester Young or Ben Webster would have been proud of, while Montague responds with an achingly pretty, bluesy solo.

In this bassless quartet it's fascinating to hear the rhythmic dialogues at play—the punchy unison motifs or riffing in support of a soloist. Stanley, whether carving rumbling patterns in the piano's lower keys, or evoking bass chords on electric organ, is particularly busy. Maddren makes judicious use of his bass drum, and in general, drives the quartet with bustling intensity and no little nuance. Maddren's dynamic polyrhythms are to the fore on "Eric's Tune," an episodic composition of multiple peaks dedicated to Eric Kamau Gravatt, who held the drum stool in early Weather Report and later with McCoy Tyner.

Whatever its influences, MY IRIS is unquestionably a contemporary outfit, and an original one at that. In the intricate unison lines, rhythmic mantras and spectacular soloing, particularly on "I Can't Find My Other Brush" and on the gorgeous, slow-burning "Abbot & Costello," the quartet has arguably more in common with modernists like Marius Neset, for example, than with jazz of the 1960s or 1970s.

Clewes' places a very personal stamp on "Free to Fall"—the tender, home-spun poetry of her vocal blending with organ drone and brushes on the delicate intro. In a heartbeat, the quartet sparks into life, with Stanley and Clewes engaging in thrilling call-and-response before following their respective muses. The quartet passes through intricate ensemble passage then intimate drum and guitar duet, before coalescing in a lyrical, yet rhythmically urgent finale that fades with quiet majesty.

Strong compositions brilliantly interpreted, MY IRIS Live! may have been an accident of sorts, but it's still a welcome addition to the group's discography. An early contender for best live album of the year.