I was born in Philadelphia, Pa, and raised in New Jersey (it's not as bad as it's made out to be). Soon after graduating from college with an almost, no, make that totally useless degree in sociology ( I learned, for example, that upon meeting people for the first time, kicking them and offering to sit on their lap is considered unsocial behavior - except in certain parts of Utah) I started working and touring as a full time musician. Unfortunately nothing my parents said at the time was able to stop me from doing this. I might add that before this nosedive into the world of glory and back stage lunch meat I spent a summer driving a cab. My favorite rides were the ones involving taking three transvestites from Camden to Philadelphia to buy drugs. Mind you, at the time I had no idea they were doing this but later, in the comfort of the bottom bunk in a converted van going from Phila. to Orlando, Florida I had a few moments to reflect on my past and realized that throwing a rock at a third floor window, then disappearing and reappearing in 2 minutes only to return to the same place across the Ben Franklin bridge was not indicative of a “let's chat” moment. My second favorite ride was when I survived a threat to have my skull smashed in - I think that's how the three drunken construction workers put it. At this point I knew that I was good for only a few more months at this job. On the positive side I learned how to pump gas, drive a stick shift with the shift on the steering column (what do they call that?) and find my way to all the hidden treasures of Camden, New Jersey

Anyway, my first “real” band experience on a professional level (make that, semi-professional level - it's not professional until you don't have to back up a comedian - was with a band I'm sure everyone has heard of, THE DOVELLS. They were famous for such songs as The Bristol Stomp (one of the only dances I could sort of do) and you You Can't Sit Down (actually performed by Bruce Springsteen in the beginning of his career -don't expect him to play it too often these days). This lasted for about 7 months until that fateful day when the phone rang and I was told that SOUTHSIDE JOHNNY & THE ASBURY JUKES was looking for a tenor sax player. I was so excited that I decided to find out who they were. I did and went to the audition and, as the saying goes, “I got the gig”. I then made a mental note to buy a tenor sax - I was playing an instrument I borrowed from my good friend, Jon Herington (currently Steely Dan's guitar player)

This was the beginning of 2 1/2 years of “get on the bus”, “get off the bus”, “I'll see you and raise you a quarter (we played lots of poker - low stakes now but losing or winning $10 made a big difference in our tax category in those days), and, lest I forget, many memorable playing experiences, I think.

Seriously, folks, I had a great time working with Southside but it got to the point where I couldn't play, eat or think without a moniter in front of me so I left the band, moved to a basement in Tenafly, New Jersey and then on to Greenwich Village in New York City. I soon found myself surviving on frozen Bird's Eye Corn. If you add salt and pepper you actually double the nutritional content. Eventually, after selling one of the 2 tenor saxes Southside bought me (I had to pay my rent somehow) I got a phone call from the Jukes' horn section to join them in their work with DIANA ROSS. There is no need to go into this other than to say that I lasted for under 2 years (reaching out was OK but I was getting sick of the touching) and left to go on tour with DAVID BOWIE.

The Serious Moonlight Tour was a great tour to be on and it gave me the opportunity to become a founding member of THE BORNEO HORNS, a sax trio consisting of myself, Steve Elson and Lenny Pickett. We played on numerous records and did a few tours playing Lenny's music but I'm getting distracted - more so than normal.

In the effort of making this bio come to a close, I'll speed things up.

Some highlights after Bowie include doing two tours with DURAN DURAN, two tours with SERGE GAINSBOURG (my favorite playing situation in that I had a lot of solo space and a lot of freedom) and a host of other things - TV shows, records, concerts as well as club gigs which I love (when the sound doesn't suck and the floor isn't too sticky from beer spills and there is only minimal damage to my sax at every gig). I have recently been doing some work with RADIOHEAD and trying to get my new CD, THE TIES THAT BLIND, signed.

I have left out quite alot (like studying with Denis Sandole, writing music for television with John Petersen, reading the entire 3,500 or so pages of Proust's, Remberance of Things Past - that alone took over two years including time off for good behavior - but I've probably told more than any of you are interested in knowing.

Thanks for listening. Show less

Stan Harrison Hits Road with They Might Be Giants & Duran Duran 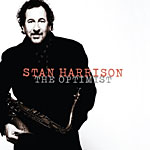 All About Jazz musician pages are maintained by musicians, publicists and trusted members like you. Interested? Tell us why you would like to improve the Stan Harrison musician page.