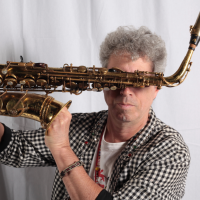 Something quite original in the world of jazz and beyond.
—Kory Cook, KUT Radio, Austin, TX

Ken Field is a saxophonist, flautist, percussionist, and composer. Since 1988 he has been a member of the internationally acclaimed electrified modern music ensemble Birdsongs of the Mesozoic, with whom he has recorded eight CDs. Field leads the Revolutionary Snake Ensemble, a experimental and improvisational brass band, and performs with the community-based Second Line Social Aid & Pleasure Society Brass Band. Since 2015 he has annually led a pick-up band of unafiliated musicians at the HONK!Oz Festival in Wollongong, NSW, Australia. His solo releases document his work for layered saxophones and his soundtracks for dance and film. Field was named a 2017 Finalist in Music Composition by the Massachusetts Cultural Council. Field has performed in the US, Canada, Mexico, France, Germany, Spain, Hungary, Portugal, Sweden, Ireland, Italy, Poland, Australia, New Zealand, & Japan, and has been awarded residency fellowship grants at the MacDowell Colony (New Hampshire), the Ucross Foundation (Wyoming), the Fundacion Valparaiso (Spain), the MacNamara Foundation (Maine), and the Atlantic Center for the Arts (Florida). His musical projects have been featured in The New York Times, Saxophone Journal, The Boston Globe, The Los Angeles Times, The Washington Post, Tower Pulse, Billboard, Cadence, The Wire, The Orlando Sentinel, The New Yorker, and many other publications. Field has performed at the Roswell (NM) Jazz Festival, for President Bill Clinton, with Trombone Shorty, Charles Neville, Grammy-winning percussionist Glen Velez, former J. Geils frontman Peter Wolf, the Jazz Composers Alliance Orchestra, The Violent Femmes, and the Georgia Symphony Orchestra. In 2004 he was commissioned by Bridgman/Packer Dance to compose music for Under the Skin, which has been performed widely. A CD of this music was released in 2006 on Innova Recordings. Double Expose, his second commission for Bridgman/Packer, premiered in 2010. In 2000 Field released Tokyo in F, the live recording of an improvised concert he gave in Tokyo with three prominent Japanese musicians he met only just before the performance. His 1999 release of layered saxophone music, Pictures of Motion, integrates elements of ambient, hiphop, minimalism, swing, acid, improv, and Balkan processional music. The CD includes two of Field's compositions for Sesame Street, and features a guest appearance by renowned multi- instrumentalist Amy Denio. Field's 1996 debut solo release, Subterranea, documented his multitracked saxophone improvisations, recorded mostly in an underground chamber in Roswell, New Mexico.

Subterranea received airplay on over 160 radio stations in the US, Canada, Switzerland, and Japan. Field is also an award-winning composer of music for animation, film, and dance. His music is heard regularly on the popular internationally-broadcast children's television program Sesame Street, in collaboration with his late wife, animator Karen Aqua. His soundtrack work has been broadcast on HBO, the Movie Channel, the Sundance Channel, and PBS. Presentation, residency, and workshop experience includes Wellesley College (MA), Alfred University (NY), Western New Mexico University, Sheridan College (WY), the Artists' Association of Nantucket (MA), Applewild School (MA), Camden-Rockport High School/YouthArts (ME), New Mexico Military Institute, the Carolina Film Festival (NC), Emory University (GA), the University of North Carolina, Hilo & Waiakea High Schools (HI), Dartmouth College (NH), the Massachusetts College of Art (MA), Lebanon Valley College (PA), the Boston Museum of Science (MA), the Creative Music Orchestra (New Haven, CT), the Fitchburg (MA) Art Museum, and, with Delfeayo Marsalis, the Nunez Correctional Learning Center (Port Sulpher, LA). In 2003 the Saxophone Journal featured a Masterclass CD by Field based on the layered saxophone improvisations from his first solo CD Subterranea. Ken Field is an Applied Microphone Technology Endorser and a Vandoren Performing Artist. He hosts The New Edge, a weekly radio program on WMBR in Cambridge, Massachusetts. Field is former Chair of the Cambridge Bicycle Committee, a member of the HONK! Festival Organizing Committee, and is on the Boards of JazzBoston and Tutoring Plus of Cambridge.

"Something quite original in the world of jazz and beyond." —- Kory Cook, KUT Radio, Austin, TX

"Touches all the right cornerstones of jazz, but also funks my socks off!" Kyle Press, WKDU, Philadelphia, PA

All About Jazz musician pages are maintained by musicians, publicists and trusted members like you. Interested? Tell us why you would like to improve the Ken Field musician page.