Ken Field: Under the Skin 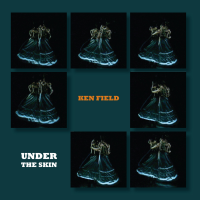 The opening track's sounds of bass with alto saxophone improvising over a street beat are practically an invitation to dance, especially to anyone who's been a "second liner" in a traditional New Orleans funeral recessional. This music, after all, was composed by alto saxophonist Ken Field as "dance music," an integral component of a multimedia work, Under the Skin, combining live dance performance, original music, and visual technology. The technology used in constructing the musical pieces is apt to make the listener feel all too keenly the absence of the dancers. The poet Yeats' metaphor for organic wholeness ("How can you separate the dancer from the dance?"), in effect, acquires strength on the basis of this disc, which feels more like a trisection than a whole and autonomous work.

The eight tracks, totaling less than twenty-five minutes, were assembled over a fifteen-year period, yet there is remarkable consistency. Through multi-tracking the composer-performer builds up streaming, thick and reedy textures over which he is able to provide improvisations in real time. Although the occasional synthesized rhythms fall, intentionally or not, considerably short of verisimilitude, the sounds are predominantly "natural," free of the phasing patterns and mechanical effects often associated with musical synthesis. Moreover, the comparative absence of key changes is largely offset by the brevity of the pieces and their polyphonic "chord-like textures.

The opening and closing pieces are certainly accessible, both employing resonant bass and infectious rhythms. "Om on the Range stands out as an interesting experiment in minimalism, with the use of a drone tone gradually acquiring intensity through dynamics and widely spaced percussive effects. Yet the appeal of this music would seem limited to a few narrowly-defined audiences: those who saw the original production; "constructionist"/experimental musicians who build musical compositions through the layering of a single acoustic instrument; close followers of the saxophone and its heretofore unrealized possibilities. Still, if the original was performed as a gesamtwerk in miniature, the wonder is that it was not released as a video DVD.

As fascinating as were the early examples of musique concrète and the works of Varese, Stockhausen and Steve Reich, this direction of avant-garde experimentation has undeniably lost some of its allure now that digital music-making has become the property of the mass consumer. After the synthesizing, recording, mixing, re-recording, and ultimately performing, is the yield proportionate to the artist's labors? Probably not, if economics weigh into the equation. The investment of time and money in such an extended project would easily appear to exceed the cost of hiring several additional "live" musicians. To his credit, Field's constructions all have an undeniable "human" quality—breathy, very "present," balancing single-voiced unity in the creation of the sonic canvas with multi-voiced complexity in the reception of sound. But the question of whether the result is sufficiently different from, let alone an improvement upon, the textures produced by a conventional saxophone quintet remains far from settled based upon present evidence.

Under the Skin; Streaming; Dressing Part 1; Five Saxophones in Search of a Meaning; Downpour; Om on the Range; Dressing Part 2; Slits in the Curtain.