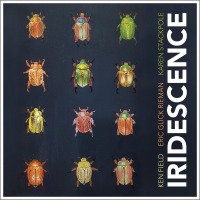 "I was on my way back home to Massachusetts in early 2019 from what has become an annual gig for me in Australia, and we had a 2-night stopover in San Francisco. I had my sopranino saxophone and my flute with me for that trip.

I had inquired with a few friends a few months earlier to attempt to take advantage of the stop by setting up a performance opportunity for myself. I learned that there was a great house-concert situation at "Tom's Place" in Berkeley, and was able to secure a date. I was also very lucky to be able to contact and enlist the wonderful keyboardist Eric Glick Rieman, who works often with prepared keyboards. I had some familiarity with his work through my years of hosting the weekly radio program of "creative instrumental music" called The New Edge, on WMBR in Cambridge, MA. A few musicians were suggested to round out the trio, and we were fortunate to end up with fantastically creative percussionist and gong player Karen Stackpole.

The three of us had never met or played together, so it was an evening of totally spontaneous improvisation. Our host Tom made a high-quality stereo recording, Peter Kaars took some amazing photographs, and NY based Erdem Helvacioglu subsequently did some wonderful work mastering the live tracks.

While I was in Australia the following year, in early 2020, I met the visual artist Joel Tonks, and when I saw his beautiful painting (which I originally thought was a photograph!) of an array of iridescent beetles, I thought that it would not only make for a great cover image, but that the title Iridescence was a good fit for this music. I'm grateful that Joel gave me permission to use the image for this release."

All About Jazz musician pages are maintained by musicians, publicists and trusted members like you. Interested? Tell us why you would like to improve the Iridescence musician page.