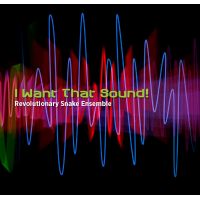 slideshow
The Revolutionary Snake Ensemble (RSE) has been developing and cultivating a distinct sound critics and audiences alike hail for invigorating an illustrious musical heritage with fresh ideas, wit, and spunk while in the process attracting new and younger audiences to the music. In fact, RSE has been at the forefront of the jazz renaissance The Guardian (UK) newspaper recently touted as a “new golden age”.

Over more than a quarter century of touring and performing in settings ranging from clubs and concert halls to festival and parades, RSE has been evolving and refining a unique sound that incorporates post-bop and avant jazz influences without ever losing its allegiance to the groove and the party spirit of NOLA.

I Want That Sound!, RSE’s fourth album, celebrates the band’s collective experience by providing a snapshot of where and what it is today – a tight, funky, fun, and heady unit that’s transgenerational in its appeal and whose music resonates with listeners on melodic, harmonic, and rhythmic levels. The personnel heard on the album is Field’s current working band and the RSE line-up that has played continuously together the longest. I Want That Sound! is also the first in the band’s discography to feature all original material with all but the infectious opening track “Slippery When Wet” penned by Field.

Praise for RSE’s “I Want That Sound!”

“[RSE] continues to mine the vein of New Orleans- with post-bop, and touches of Avant—this band cooks; edgy, raucous, fun, and first rate!...this album will kick start any party you're thinking about throwing this fall."—KBCS 91.3 Seattle Public Radio

“People tend to think of second line bands- brass bands steeped in New Orleans traditions- as instant party starters. It's a great compliment, maybe the best compliment ever, but it limits the sonic and emotional range of these bands. Revolutionary Snake Ensemble can absolutely get a party started. But on the local horn collective's fourth album, “I Want That Sound!," the players also explore the wild outerlands of jazz."—Boston Herald

“More than a little chaotic- by design. It's also immensely enjoyable, whipping up high spirits without the need of any visual theatrics. It should set the feet of most of its listeners dancing, or marching."—The Arts Fuse

“One of the hottest sounds ever!"—KTEP El Paso Public Radio

“Revolutionary Snake Ensemble has been putting its unique and somewhat twisted twist on the New Orleans brass band tradition for more than 25 years...hard-partying avant-funk, with boisterous soloing...I Want That Sound! is a strong example of how Ken Field and the Revolutionary Snake Ensemble continue to push the brass band tradition forward in an entirely original way, all the while making music that's a heck of a lot of fun."—NYC Jazz Record