By Edward Blanco
August 8, 2013
Sign in to view read count 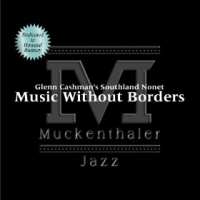 Tenor saxophonist Professor Dr. Glenn Cashman and composer, lyricist and voice teacher Eric Futterer have been friends and collaborators in music for more than a decade. Years ago, with the help of veteran west coast bassist Howard Rumsey (Lighthouse All-Stars), Futterer and Cashman collaborated on their biggest effort to date when they founded the Muckenthaler Jazz Festival, held annually at the historic Muckenthaler Cultural Center ("The Muck"), an eighteen-room villa on 8.5 acres in Fullerton, CA. Music Without Borders is the natural evolution of the duo's concert experience with this nationally recognized festival.

With Futterer contributing several compositions and serving as Executive Producer, it's Cashman who delivers as the primary composer, arranger, musician and bandleader of the all-star Southland Nonet. Boasting an A-list cast of players, among them trumpeters Carl Saunders and Ron Stout, trombonist Andy Martin, bassist Luther Hughes and drummer Paul Kreibich, this is one little big band that could and does deliver elegantly with power and finesse. Reprising a tune first recorded in 1996, Cashman and alto saxophonist Bruce Babad provide blistering solos on "I've Got Your Rhythm," the opening salvo of a ten-piece swinging repertoire that takes no prisoners.

Fascinated by the Brazilian genre, the leader's Samba-tinged "Vida Feliz" highlights soaring performances from both Saunders and Martin on this colorful piece. Speaking of color, the original "Fall Color" displays some more of Martin's chops on the trombone followed by Cashman's tenor voice, flowing over a grooving rhythm section that brings pianist Ed Czach to the fore on a sparkling nine-minute burner. Futterer's warm "I Will Always Wait For You" is one of the soft spots of the disc with glancing blows from Stout dotting this beautiful, dark-hued ballad.

The music returns to its swinging theme with Futterer's Brazilian-flavored "Carnaval," featuring Bob Efford's burly baritone saxophone voice spiced up by accompanying solos from Saunders and drummer Kreibich. The swinging boppish flair of the set continues on the big band chart "Sumo" changing direction only slightly on the humble "What Dolphins Say" and returning to form on "Bailey Street," the first score Cashman penned for his Nonet. Futterer's "Corazon" and the saxophonist's "Cadenzas for Cadenas" round out the set.

Cashman's Southland Nonet is a world-class ensemble producing the kind of music that no borders will hold. Melodic, catchy, hot and scintillating, Music Without Borders is bound to resonate around on the globe.

I've Got Your Rhythm; Vida Feliz; Fall Color; I Will Always Wait For You; Carnaval; Sumo; What Dolphins Say; Bailey; Corazon; Cadenzas for Cadenas.