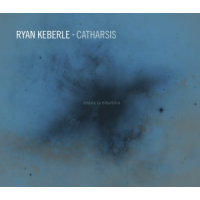 Music can be defined, analyzed and categorized, but those formal processes do little to help demystify the effect it can have on people. That's because music's power isn't directly related to the science behind the sound; music truly makes its mark through emotional connectivity, and trombonist Ryan Keberle is keenly aware of this.

In just over a decade, Keberle has become one of the most in-demand trombonists on the scene, and he's done so by using his considerable technique to communicate with, rather than play at, the people who encounter his horn. Keberle keeps wide-ranging company, working with everybody from Latin luminary Ivan Lins to compositional queen Maria Schneider to pop/R&B superstar Alicia Keys, but his raison d'être isn't diversification; he's all about touching the soul through sound means.

Keberle relied on a rich, multihued brass mixture and a firm rhythmic foundation on his earlier albums—Double Quartet (Alternate Side, 2007) and Heavy Dreaming (Alternate Side, 2010)—but he abandons that strategy here. In forming Catharsis, a piano-less quartet with two horns, bass and drums, Keberle left his self-admitted comfort zone, but it did him some good; this already-stellar artist reaches a new artistic peak with Music Is Emotion.

This outfit gets down to the business of direct interfacing from the get-go and they do a damn good job of it. Keberle's full-bodied horn is never short of spectacular, as he explores the remote recesses of his own work, and trumpeter Mike Rodriguez is part angel and part devil, alternately warming the soul and scorching the earth. The rhythm team of bassist Jorge Roeder and drummer Eric Doob collaborate in an upfront manner, but they also manage to make everything feel just right on the bottom end.

The Beatles and indie rock artists influence Keberle's outlook, but the blues form—and feeling—is of greater importance in his overall vision. Catharsis communes with the blues on more than one occasion, using this tried-and-true format as a foundation for its explorations. Keberle's "Big Kick Blues" goes beyond the norm, sneaking a peak into outward bound territory, while Art Farmer's "Blueport" remains true to its central tenet. Both of these numbers are good, but "Blues In Orbit" is even better. The cool-and-the-raunchy are brilliantly balanced on this slow, smoldering treat. While it's tempting to call this the standout track on the album, it's too close to call that particular race; virtually every number, from the intrigue-laced, melodically appealing "Carbon Neutral" to the absorbing "Djohariah," is in the running.