By WOODROW WILKINS
January 9, 2005
Sign in to view read count 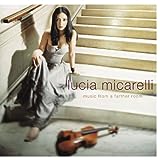 Even with that experience, the uninitiated listener isn't fully prepared for the stylistic diversity and creative flair of Music From a Farther Room , Micarelli's debut album on 143/Reprise Records, executive produced by Groban. The young violinist presents a widespread soundscape in which references to David Bowie, Sibelius, Astor Piazolla and Rodgers & Hart blissfully coexist.

"My goal was to maintain the integrity of the classical repertoire I grew up with, but present it in a contemporary way," Micarelli says. "At the same time, I've had such a wide range of influences, I felt it necessary to pay tribute. The juxtaposition of old and new is something I've been fascinated with for years, and that became the foundation for this record."

The result is Music From a Farther Room , a tour de force notable as much for its emotional honesty as its extravagant artistry. Highlights of the album include the sad, yet beautiful "She Is Like the Sparrow," featuring vocalist Leigh Nash, a charming presentation of "My Funny Valentine" and the fascinating offering of "Nocturne/Bohemian Rhapsody," part of which provides a dramatic spin on Queen's classic rock hit.

Micarelli covers the range from neo-classical to pop-jazz to rock on this outing. Her play is elegant, and runs the gamut of emotions from brooding to joyous. At times, sad, yet always beautiful.