By JOHN SHARPE
September 2, 2018
Sign in to view read count 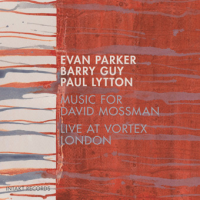 Over 35 years and counting. It's fair to say that the British trio of saxophonist Evan Parker, bassist Barry Guy and drummer Paul Lytton constitutes one of the longer-lived units in the free improvised realm, a domain often distinguished by its tendency towards ad hoc groupings. So, with a discography over two score in size, you can be sure that when a new release arrives it documents something worth hearing.

And that is indeed the case with Music For David Mossman, dedicated to the founder of London's Vortex Jazz Club where the music was recorded in concert, which hints at a more serene, more introspective aspect of what can still be a ferociously focused outpouring. Maybe that's at least partly a consequence of the subsequent editing and programming undertaken by Parker, to construct the four pieces presented here from two live sets.

Even though they now only come together a few times each year, the connections between the three men have never seemed stronger. That's obvious straight from the off in "I," which begins with a wonderful duet between Guy and Lytton. Although out of the blocks gingerly, once the bassist echoes Lytton's tappy patter, it results in the drummer ramping up the emphasis, and the interplay soars. But if that suggests an impending all out assault, it's not to be. In one of the many mercurial transmutations which pepper this disc, the impetus abruptly ceases and, when Parker joins Guy's glacial resonances, it's in subdued, even melancholy, mood.

Notwithstanding such switchbacks, the default remains rapid-fire interaction notable for the density of information imparted at pace, due not only to speed of thought but also speed of execution. Each is a groundbreaking and influential master of his instrument. Guy's unaccompanied introduction to "II" draws on some of his innovations, as he extracts wobbling metallic overtones through a rod threaded between his strings, alternated with sharp plucks and ringing twangs, with all the elements made audible through judicious use of a volume pedal.

Lytton enjoys a brace of turns in the spotlight on the lengthy "III," one showing his proficiency on the conventional sonorities from bass drum, cymbals and snare, but the other made up of simultaneous rustling, rattling and scraping noises from the array of percussive implements which supplement his kit. For his part Parker not only indulges in the expected prolonged passages of circular breathing, generating a querulous falsetto to crown his burnished serrated lines, but also edges within shouting distance of lyricism on more than one occasion. But at the start of "IV" that reflective mode becomes prominent once more, as he initially holds back from leaping into another note-filled extravaganza.