By Dan McClenaghan
February 8, 2017
Sign in to view read count 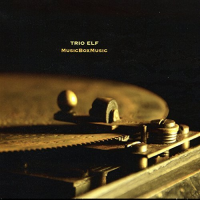 German pianist Walter Lang leads something of a double life, musically. On the one hand, he fronts standard piano trios with an impressionist bent—in the mode of a Marc Copland—on recordings like Softly As In A Morning Sunrise (Hagel Neyer Records, 2005) and Eurasia (M & I Records, 2009); on another hand, he heads up Trio ELF, a group with very modernized approach to the piano trio format, one that incorporates synth-like grooves and dance club beats, and staccato hip hop rhythms.

Music Box Music is the group's sixth album, and in keeping with the precision aspect of actual music boxes—eighteenth versions of the contraptions were crafted by Swiss watchmakers—ELF's sound incorporates an often machine-like rhythmic precision, due in large part due to the inputs of bassist Peter Cudek and drummer Gerwin Eisenhauer.

Though precise, the sounds of music boxes were/are delicately pretty sounds. Lang produces that atmosphere on the opening of "Danca Da Fita," with a light plinking of the keys on a deliciously coy melody, before the bass and drum come in to supply a relentless momentum. On "Stadium," Lang opens with deep, bell tolling notes that shift—with the entry of his band mates—into a dance club groove.

Music Box Music walks a line, with perfect balance, between the modernistic, hyper-rhythmic piano trio, and the more lyrical, traditional side of the format.