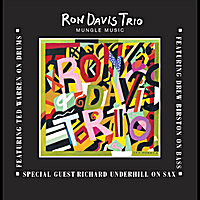 Having Art Tatum as an influence has been an apparently positive on Ron Davis. The man who is a poet, short story writer, a Ph.D. in French Linguistics, and a once-upon-a-time lawyer, in no particular order, made his professional debut (and first record) as a musician in 1970. He now takes a bow with this third, a tight trio date.

Davis’ compositions show his flair for melodic writing. The other tunes he chooses to round out this album have that attribute as well, and while melody is one facet the other factors contributing to an enjoyable listening experience are the tight weave of the group and a defined individual presence. Richard Underhill leads the charge when the four find “Blues For Suze.” His phrasing is hard-edged as he navigates the whorls of the blues, the antithesis of what Davis does when he comes in with a lighter approach that harmonizes and colors with a brighter hue. In doing so he perfectly casts a neat adjunct.

There are references to Tatum, but that does not water down the blues. He finds Tatum calling on other tunes as well, including “Not What You Think,” where he rollicks in abundance and then leaves the door open for Drew Birston to add a simmer stoked by Ted Warren on drums. At the other end of the spectrum is “Hymne à l’amour,” as sweet an ode to love should be, underlined by the gentle cluster of notes and lyrical passages from Davis.

Visit Ron Davis on the web.