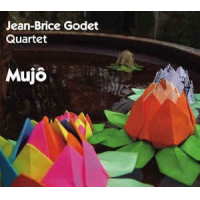 Young French reedman Jean-Brice Godet enlists a seasoned cast for his debut leadership album, recruited during one of his frequent visits to NYC. Downtown stalwart Michael Attias completes the two horn front line, while bassist Pascal Niggenkemper and drummer Carlo Costa man the engine room. Godet works regularly with celebrated bassist Joëlle Léandre, appearing on Can You Hear Me (Ayler, 2016) by her tentet, and has also performed in the past with the likes of Anthony Braxton and Fred Frith. From a program of seven original cuts recorded in 2013 and 2014, Godet creates a diverse and sometimes exploratory set.

Attias brings his keen musical intelligence on alto saxophone, incisive but betraying a melodic bent which isn't always so obvious on his own discs. In fact on this showing Godet on clarinet and bass clarinet comes across as the more abstract and timbrally audacious. Costa imparts a clanking momentum in which he simultaneously avoids repetition yet still maintains a pulse, ably abetted by Niggenkemper. With bow in hand, the bassist comes into his own, stepping forward to shade and supplement the reeds.

Godet's varied compositions typically involve the two reeds either in unison or braiding symbiosis. A songlike core resides at the heart of themes such as the opening "Takanankuy (Dance, Danse, Tanz)" anchored by a buoyant riff, first held down by Godet's bass clarinet while Attias propounds the melody and subsequent variations, before swapping roles. Although "Eloge de la chute" begins differently with more freeform interaction, it too settles around a lyrical center, this time evoking a soundtrack to a 1950s Parisian movie, though punctured by more pugnacious outbursts from the woodwinds and drums.

On pieces where Costa concentrates on pitch and coloration, a chamber feel predominates as the reeds interweave with Niggenkemper's arco, drifting and airy on "Werde ich Dir einmal begegen?" but more conversational and ultimately emphatic on the concluding "lange beim Regen werd'ich Dein." "La voix des cendres" constitutes the most extreme cut, built around a carefully marshaled sequence of long tones and silences, in which multiphonics vie with reverberating bass abrasions, and the occasional piercing shriek, and provides an indication that a broader range of expression lies well within this outfit's grasp.