By Dan Bilawsky
February 27, 2018
Sign in to view read count 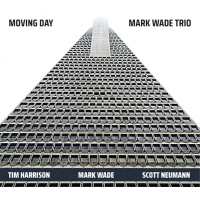 Moving days are never easy. They come with the organizational stresses surrounding the act itself, the memories attached to the space departed, and the unknowns that await. But they also provide a rush of excitement, a touch of anticipation, and a good deal of hope connected to a fresh start and the journey toward a new dwelling. All of those feelings and more are wrapped up in this absorbing album's title track. And with its focal shifts, communicative spirit, and balanced approach to the (bass-fronted) piano trio aesthetic, this lead-off number exemplifies what this group is all about without giving all of its secrets away.

Bassist Mark Wade knows a thing or two about moving—according to this album's liner notes, he's done it about fifteen times—but he doesn't equate the action with the spirit of saying "goodbye." Instead of leaving the past behind when moving forward with this project, he takes it with him. Wade capitalizes on the bonds formed within his established trio, building on what that band demonstrated on his debut—Event Horizon (Self Produced, 2015)—and breaking new ground. The resultant music speaks to artistic sympathies, subtleties, and strength.

If Event Horizon was read as an album marking development, this follow-up can be viewed as a realization of that phase: Wade now writes and creates with concrete notions and this trio has truly found its stride. That's demonstrated clearly in these aural reflections of stories and personalized subjects. With the gorgeous "Something Of A Romance," love in bloom has its say; on the flowing "Midnight In The Cathedral," a church's musical messages echo and shimmer through space before Wade and company carry time forward and allow it to breathe; through "The Quarter," the trio imagines an evolving stroll through NOLA's cobbled streets; and with "In The Fading Rays Of The Sun," dusk on a summer night is translated to stunning sound. In each instance, Wade, pianist Tim Harrison, and drummer Scott Neumann always make clear what they mean to say and where they've chosen to go.

While many of these pieces work with multiple themes and meter changes, the music never veers toward inaccessibility or speaks like math. Whether making nips and tucks to standards like "Autumn Leaves," drawing a French through line across a conceptual triptych on "The Bells," or playing with the relationship between two differing ideals on "Wide Open," Wade's work manages to connect on an emotional level while remaining true to its principles. That may not sound like much, but it's far easier said than done.

Moving Day; Wide Open; The Bells; Another Night in Tunisia; Something of a Romance; Autumn Leaves; Midnight in the Cathedral; The Quarter; In The Fading Rays of Sunlight.