BY GLENN ASTARITA
February 16, 2010
Sign in to view read count 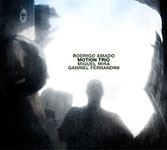 Amado—a prolific artist who often records for the increasingly noteworthy Portugal-based Clean Feed Records amid touring jaunts in the USA—is a formidable player who can blow walls down, while transmitting a softer side when appropriate. Mira imparts numerous perspectives while holding down the fluid bottom-end with Ferrandini's blustery pulses and keen use of small percussion implements. Amado seemingly flings daggers across the studio via his bold and heated attack, complete with raspy overtones and climactic outbursts.

There's no doubt this trio has guts, and it's not afraid to exploit it. Featuring sequences of jagged loops atop the rhythm section's expansive sound, the musicians mingle feint melody lines with free-floating exchanges, while tempering the currents to rebuild tension.

On the rambunctious "Testify," the musicians generate a tumult of scrappy exchanges, nicely propelled by Ferreandini's use of woodblocks, small cymbals, and peppery rim-shots. The band renders an expressionistic feast for the mind's eye.

The unit finalizes the program with the intense "In All Languages," highlighted by Mira's fluttering arco lines, and his band mates' loose groove call-and-response mechanisms. Skillfully lowering and raising the tide, the group then soars skyward for the grand opus. Amado and associates are at the very top of their game throughout Motion Trio, a rather aggressive jazz foray without borders.

Language Call; Testify!; Radical Leaves; As We Move...; Ballad; In All Languages.