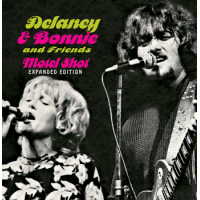 With the passage of time, Delaney and Bonnie Bramlett, are unfortunately becoming more and more the unsung heroes of a Seventies rock and roll. The Southern couple not only acknowledged, but built upon roots of blues, folk and country, as well as the soul and r&b influences at the very heart of their style, aided and abetted by a rotating cast of accompanists that, at various points included George Harrison and Eric Clapton. Just prior to the purposefully-conceived Motel Shot, the core of the ensemble had departed to form Joe Cocker's Mad Dogs & Englishmen, while drummer Jim Gordon, Carl Radle and keyboardist/vocalist Bobby Whitlock later became 'The Dominos' to Slowhand's 'Derek' for the seminal guitar hero's masterwork, Layla And Other Assorted Love Songs (Polydor, 1970).

The spirit of community so prevalent in the early Seventies-not just within D&B's Friends-has its roots in the bonafide gospel songs that dominate Motel Shot. This single twenty-track CD juxtaposes the likes of "Will the Circle Be Unbroken" with the blues of Robert Johnson, "Come On In My Kitchen," both of which reside as comfortably next to each other as traditionals including "Goin' Down the Road Feelin' Band." And the originals of Delaney's, including "Never Ending Song of Love," are no less infectious and thus of a piece with the rest of the material.

Composed of the deliberately informal performances, Motel Shot was deliberately recorded with acoustic instruments, under the supervision of Bruce Botnick, at whose home the sessions took place. The engineer for The Doors then supervised additional studio work and although no specific personnel credits appear alongside the graphics and interviews within the enclosed booklet here (apart from lyrics to eleven of the main dozen tracks), names such as Gram Parsons, Dave Mason and Duane Allman are commonly known to have been present at one time or another to contribute. As described in the liner notes, the concept for the album was an extension of that of Delaney & Bonnie and Friends, lending itself to such fluidity of participation.

Regardless of who's involved from track to track, there's a definite continuity of spontaneity that permeates this set as it was originally issued and that inviting informality and rootsy authenticity carries over into the eight 'bonus tracks,' not all of which are mere alternate tracks. Composed by the Bramletts with guitarist Steve Cropper of Booker T & the MG's, "I've Told You for the Last Time" subsequently appeared on the eponymous solo debut of Slowhand's as did (in two versions) "Lonesome and A Long Way From Home:" the skeletal arrangements of these numbers not only serve as models for the subsequent productions, but carry all the lively atmosphere of that secular congregation of Delaney & Bonnie's distilled to its essence on Motel Shot .

The budget-line cover graphics of Real Gone Music's expanded edition of this, the fifth in a series of six studio albums Delaney and Bonnie recorded together (on four different labels with The Beatles' Apple Records a contender at one point) belies the depth and breadth of the archival effort. Fortunately, the reissue label retained much of the original artwork, imagery of which matches the level of expertise in the music and its production.

Where the Soul Never Dies; Will the Circle Be Unbroken; Rock of Ages; Long Road Ahead; Faded Love; Talkin' About Jesus; Come On in My Kitchen; Don't Deceive Me (Please Don't Go); Never Ending Song of Love; Sing My Way Home; Goin' Down the Road Feeling Bad; Lonesome and a Long Way from Home. Bonus tracks: I've Told You for the Last Time; Long Road Ahead; Gift of Love; Come On in My Kitchen; Blues; Lonesome and a Long Way from Home; What a Friend We Have in Jesus; Farther Along.