By Marcia Hillman
April 4, 2009
Sign in to view read count 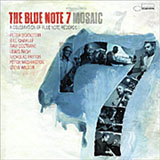 The group is an all-star band with a big sound, each member a virtuoso player and most established leaders in their own right. But they have come together to achieve a balanced and effective collaboration. Throughout, Charlap is inventive and sometimes playful, Payton bright and often haunting (as on McCoy Tyner's "Search For Peace"), Coltrane lean and expressive, Wilson fluid on alto and flute ("Little B's Poem"), Bernstein smooth and silky (featured here on Duke Pearson's "Idle Moments"), Washington solid and melodic and Nash spry and conversational.

It must have been difficult selecting only eight songs from the vast catalogue of this seminal label. In an interview, Charlap mentions that the aim was "to honor the label and its key players, whittling it down to eight of our favorites." He also went on to say, "Each arranger had the opportunity to choose their pieces according to what spoke to them musically." No mention has been made of a sequel to this offering, but it seems a perfect band to create an anthology series.