Mort Weiss: Mort Weiss: All Too Soon - A Jazz Duet For Clarinet and Seven String Guitar

By Samuel Chell
November 24, 2008
Sign in to view read count

As a result of Weiss and Eschete listening not merely to each other but intently to themselves, 'All Too Soon' exemplifies jazz as it should and can be 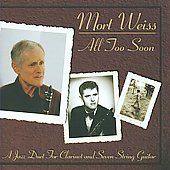 Mort Weiss
All Too Soon: A Jazz Duet for Clarinet and Seven String Guitar
SMS Jazz
2008

Not the least of this album's attractions is the title. To those few listeners familiar with the tune, "All Too Soon" might summon up one of Duke Ellington's more obscure compositions, were it included in the disc's playlist of no fewer than a dozen jazz "classics." Or it could be a reminder of the irreparable loss to the music as a result of the recent, premature death of clarinetist Mort Weiss' brilliant bassist, Dave Carpenter, to whose memory the album is dedicated. But to anyone familiar with the Mort Weiss Story, All Too Soon represents the life and career of the remarkable musician who, after shelving his axe some 45 years ago, suddenly burst back on the scene with several head-turning albums recorded with major players, ranging from veteran reedman Sam Most to organist Joey De Francesco.

The key to the album's title is most likely held by the poet Robert Browning, who wrote: "Come grow old with me—the best is yet to be." One suspects that with All Too Soon the clarinetist is saying, in effect, "I couldn't agree more, but did we have to get here so quickly?" Weiss has had quite a ride, and the present album, recorded on the day of his 73rd birthday, is at once a culmination of his journey and simply another milestone in the career of an artist who, above all, relishes his time along with the opportunities each increasingly precious moment offers for continued learning and growth.

Besides testifying to Weiss' extraordinary achievement, All Too Soon must be seen as a resoundingly successful statement by guitarist Ron Eschete. Always a respected musician but rarely mentioned in the same breath with a Jim Hall or Joe Pass, a Russell Malone or Pat Metheny, Eschete demonstrates with this duo album that he's inarguably a charter member of the same exclusive fraternity of guitarists who can solo and accompany, donning a dazzling array of musical hats while never displacing attention from the music to the legerdemain of his own versatility. The telepathy between Weiss and Eschete brings to mind similar stunning duo recordings—such as those featuring Hall and pianist Bill Evans (Undercurrent, Blue Note 1963), Pass and pianist Oscar Peterson (Live a la Salle Pleyel, Pablo 1975), Malone and Bennie Green (Bluebird, Telarc 2004), and Metheny and pianist Brad Mehldau (Metheny Mehldau, Nonesuch 2006). But whereas each of those sessions included a virtuoso keyboard player, on All Too Soon the full responsibility for the time and harmony, the chord voicings and accompaniment patterns, the melodic choruses and motivic counterstatments is on the guitarist. To say the least, Eschete carries the load, and does so all the more impressively for shouldering the burden so lightly.

On the opener, Charlie Parker's "Scrapple from the Apple," taken at a faster tempo than any recorded by Parker in full flight, Weiss and Eschete tear through the head in unison, with the exception of the bridge, on which the latter switches to rhythm guitar, sounding like Freddie Green on steroids. During Weiss' first flaming solo, however, the guitarist comps like a pianist, allowing the time to be implied by the momentum established in the melodic lines of the clarinet. His own solo alternates single notes with chords and seamlessly stitches the joint between treble and bass registers of his 7-string instrument.

Like a rare vintage Bordeaux, Weiss' tone seems to acquire complexity and richness with each passing year. Its glowing, lustrous quality in the mid and lower registers of the horn begins to shine through on "Softly As in a Morning Sunrise" and the ensuing "Blue Monk," especially when Eschete's closely-blocked chord voicings augment the clarinet's lead, frequently adding a major 7th or dissonant tone to the cluster, imparting engaging tension to a melodic statement performed in lock-step by clarinet and guitar.

On the quasi-operatic "Be My Love," Weiss is a hawk in its ethereal element suddenly swooping down upon its prey (or rather a full-throated E below middle C) and then back up again to savor the product of his labors. His appetite is hardly satisfied, however. On John Lewis' "Django" the clarinetist doesn't rest until he locates terra firma yet a half step lower, and on Tadd Dameron's "If You Could See Me Now" he manages yet another half step, scooping up with effortless ease the low D that begins the tune's ascending melodic phrase. The tones are securely full and "fat," and the slow vibrato that Weiss imparts to them is less suggestive of another clarinetist than of tenor saxophonist Ben Webster.

With a player like Eschete, who simultaneously walks bass lines and plays chords in real time, the horn player's challenge of maintaining rhythmic flow is minimized if not eliminated. For the guitarist, the task at hand is considerably greater, requiring the employment of a variety of techniques. Like the late pianist Dave McKenna and a select group of musicians, Eschete has the facility to solo effectively—whether using chords or single-note phrases—over his own bass lines—but is careful not to place over-reliance on the device. More often, it's the swing generated by his thoughtful, inventive lines, along with an implied rhythm, that assures a complete and unbroken narrative sweep to each of his offerings. Besides taking turns with individual solos, the pair trade fours ("Dearly Beloved"), eights ("Like Someone in Love"), and occasionally allow the conversation to heat up and converge into full-blown fugues ("Softly As in a Morning Sunrise," "Afternoon in Paris").

Despite the employment of such varied approaches, the listener's focus throughout is on the continuous and cohesive unfolding of a purposeful collective musical result. The late tenor saxophonist Al Cohn once said that, contrary to some of the hyped theory and method books about improvising, his primary principle was simply to listen—and above all, to himself. Rather than let a single note "go to waste," even a mistake, take note of that note so that it can be repeated, altered, and developed in permutations that generate more permutations, ultimately assuring a statement that's marked by completeness, unity and organic form. As a result of Weiss and Eschete listening not merely to each other but intently to themselves, All Too Soon exemplifies jazz as it should and can be: free, spontaneous, in the moment but at the same time a representation of musical democracy in action.

Not that it's a "perfect" recording. The alteration of the verbal accents for the lyric of Tadd Dameron's timeless tune is a tad distracting; on some of the up-tempo passages the pyrotechnical phrases have a tendency to pour forth so freely—the notes running together in an almost portamento fashion—that the effect is that of an Art Tatum fill rather than a pungent musical anecdote of the sort a resourceful minimalist like Pee Wee Russell might tell. Quite possibly, Weiss who, in the liner notes characteristically pulls no punches while commenting on the state of the art and his own playing as well as naming other clarinet players for better or worse, would be all too ready to agree. Regardless, listeners familiar with his previous work are likely to be in complete agreement with his assessment of All Too Soon as his best work to date (six albums preceded it). Moreover, he singles out Jobim's "O Grand Amor" as his favorite track.

Along with "Blue Monk," it would have to be this listener's choice as well. There's not a glib or "unearned" moment to be heard during the artist's deeply-felt reading. Rather than the usual pleasant bossa nova meditation on a past love, the performance is more threnody than reflection. Each note is distinct and distinctive, each telling a story— about winning and losing, laughing and loving, out-racing time and, after a mighty struggle, conceding it some ground. It would, for some artists, serve as a fitting valedictory. But from a fighter like Weiss, not one to go gentle or otherwise any time soon, it's perhaps best seen as a "soul station," a point of respite and rejuvenation in the life of a productive if late-blooming adventurer.

Tracks: Scrapple From the Apple; Softly as in a Morning Sunrise; Blue Monk; Be My Love; Django; Dearly Beloved; O Grande Amor; Afternoon In Paris; Emily; Like Someone In Love; If You Could See Me Now; No More Blues.

Visit Ron Eschete on the web.

Tracks: Scrapple From the Apple; Softly as in a Morning Sunrise; Blue Monk; Be My Love; Django; Dearly Beloved; O Grande Amor; Afternoon In Paris; Emily; Like Someone In Love; If You Could See Me Now; No More Blues