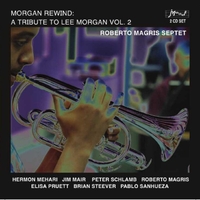 Not only is Italian pianist / composer Roberto Magris conversant with jazz history and tradition, he honors it, as he has done in a series of albums devoted to the music of pianist Elmo Hope, alto saxophonist Cannonball Adderley and trumpeter Lee Morgan who is saluted here in a second two-disc volume. Whereas young lion Brandon Lee sat in on Volume 1, released in 2010 (JMood 002), Morgan's surrogate this time around is Hermon Mehari. While neither one, of course, is Lee Morgan, they immersed themselves in the task at hand and carried out the arduous assignment with dexterity and confidence. There has been a change at the drum kit as well, with Brian Steever replacing Morgan's friend and fellow Philadelphian Albert "Tootie" Heath.

In an album largely centered, as Magris writes, on Morgan's intensely rhythmic and sometimes African-inflected essays (1963-68), the leader has broadened the range of color and energy by adding vibraphonist Peter Schlamb and percussionist Pablo Sanhueza to the lineup. Each one earns his spurs, with Schlamb an especially enticing soloist, remindful at times of such prominent mallet master as Gary Burton, Bobby Hutcherson or Joe Locke. As for Magris, his agile solos are invariably symmetrical and waste-free. The versatile saxophonist Jim Mair takes over for Logan Richardson, while the unflappable bassist Elisa Pruett returns to cement an implacable rhythm section. All of the seven songs on Disc 1 and four of the six on Disc 2 were written by Morgan (Magris composed the snappy "Libreville" and easygoing ballad, "A Summer's Kiss"). Disc 2 closes, as is Magris' custom, with a four-minute "audio notebook" in which JMood's producer, Paul Collins, and a guest reflect on Morgan's music.

That music begins with the impetuous "Bid for Sid" and includes a brace of African-influenced compositions, "Exotique" and "Zambia." Morgan also wrote "Blue Lace," "Cunning Lee," "The Sixth Sense," "Soft Touch," "Gary's Notebook," "Speedball," "Get Yo' Self Togetha" and "Helen's Ritual." While none of them quite rises to the level of Morgan's most memorable theme, the lovely "Ceora" ("Speedball" perhaps comes closest), they are never less than resourceful and engaging. The same can be said for the album as a whole, an earnest and animated tribute to one of the jazz world's most illustrious and influential standard-bearers whose remarkable career was far too brief and ended in tragedy.