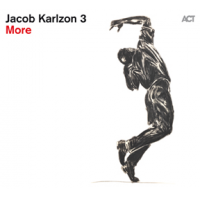 Pianist/composer Jacob Karlzon—Swedish Radio's 2010 Jazz Musician Of The Year—is difficult to pigeonhole. He's an improviser, a solo artist, a composer and an accompanist, with a longstanding musical relationship with singer Viktoria Tolstoy. In his 20-year career he's released half a dozen albums under his own name and appeared on around 40 others. The Jacob Karlzon 3—the pianist's collaboration with bassist Hans Andersson and drummer Jonas Holgersson—released its first album, The Big Picture (Stunt Records / Sundance Music), in 2011.

More is the group's second album. Intriguingly, the liner notes open with the suggestion that German heavy rock band Rammstein is a musical reference point. After listening to the album's ten tracks the comparison is even more intriguing, for none of the music comes close to Rammstein's brand of doomy metal—even the band's cover of "Here To Stay," by American rockers KoRn, maintains a distinct lightness of touch in comparison to the original's sledgehammer attack.

The faster, more densely orchestrated numbers successfully mix the trio's acoustic instruments with Karlzon's electronics. "Running" stays true to its title, with a genuine feeling of pace thanks to Holgersson's percussion. "Dirty" is another up-tempo tune, but without the lowdown, bluesy groove that might be implied by its title. The spirit of Esbjorn Svensson Trio = 4744}} inhabits "Departure," where electronic effects gain precedence over the trio's acoustic instruments.

The discernable similarities that do emerge from the tunes on More are generally linked—not to rockier genres, but to a more relaxed, less aggressive set of styles. The slow, lush melody of "Between Us" is close to the traditional British folk song "The Snows They Melt The Soonest," most closely demonstrating the influence of the great '60s Swedish pianist Jan Johansson, although Karlzon's playing on the delightful "Fool's Gold" also shares Johansson's deft, feather-light touch. The Trio's invests Nik Kershaw's pop hit "The Riddle" with a dignity that was absent from the original; Andersson's bass solo can take much of the credit for this.

Karlzon closes More with a solo performance of his gorgeous ballad "Rhododendron Rites." It's somewhat unrepresentative of the album as a whole, but there's no denying its beauty.