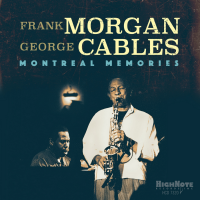 Alto saxophonist Frank Morgan and pianist George Cables, two seasoned pros at the top of their game, joined forces to map this superb concert performance at the 1989 Montreal Jazz Festival. Morgan—unchained at last from his debilitating heroin addiction and four years removed from prison—is a wellspring of creativity and passion, while Cables, eleven years Morgan's junior, matches him stride for stride and note for note, much to the delight of a hip and enthusiastic audience at the Theatre Port-Royal.

While the music is familiar, for the most part, Morgan and Cables show that it matters not so much what you play but how you play it that earns the most enthusiastic response from any audience. In that respect, each of them proves well-nigh flawless, with Morgan weaving tasteful bop-bred licks into a colorful tapestry while Cables, usually waiting his turn, follows Morgan's lead with a series of inspired and crowd-pleasing solos. This is especially decisive when there are only two performers onstage, assuming sole responsibility for melody, harmony, tempo and rhythm. Morgan and Cables not only do that well, they clearly revel in the challenge.

After cruising through bop standards by Charlie Parker ("Now's the Time," "Confirmation"), Dizzy Gillespie ("A Night in Tunisia"), Thelonious Monk ('"Round Midnight") and Jerome Kern's venerable "All the Things You Are," the duo turn to Morgan's original composition "Blues for Rosalinda" and two more by Cables ("Helen's Song," "Lullaby") before ending the concert with a sunny medley of Wayne Shorter's "Nefertiti" and Parker's "Billie's Bounce." While the album as a whole is admirable, the first five numbers comprise its most persuasive drawing card, not in spite of their familiarity but because of it; those songs have become perennial jazz standards for good reason.

As noted, by 1989 Morgan and Cables were old hands at performing under any and all conditions (in Morgan's case, even while incarcerated, which he did with the likes of Art Pepper), and they blend so well together that one scarcely notices the absence of bass and drums to round out the rhythm section. In sum, a pleasant hour of likeable bop-centered jazz by two unquestioned masters of the genre.

Now's The Time; All The Things You Are; A Night in Tunisia; Round Midnight; Confirmation; Blues For Rosalinda; Helen's Song; Lullaby; Medley: Nefertiti/Billie's Bounce.